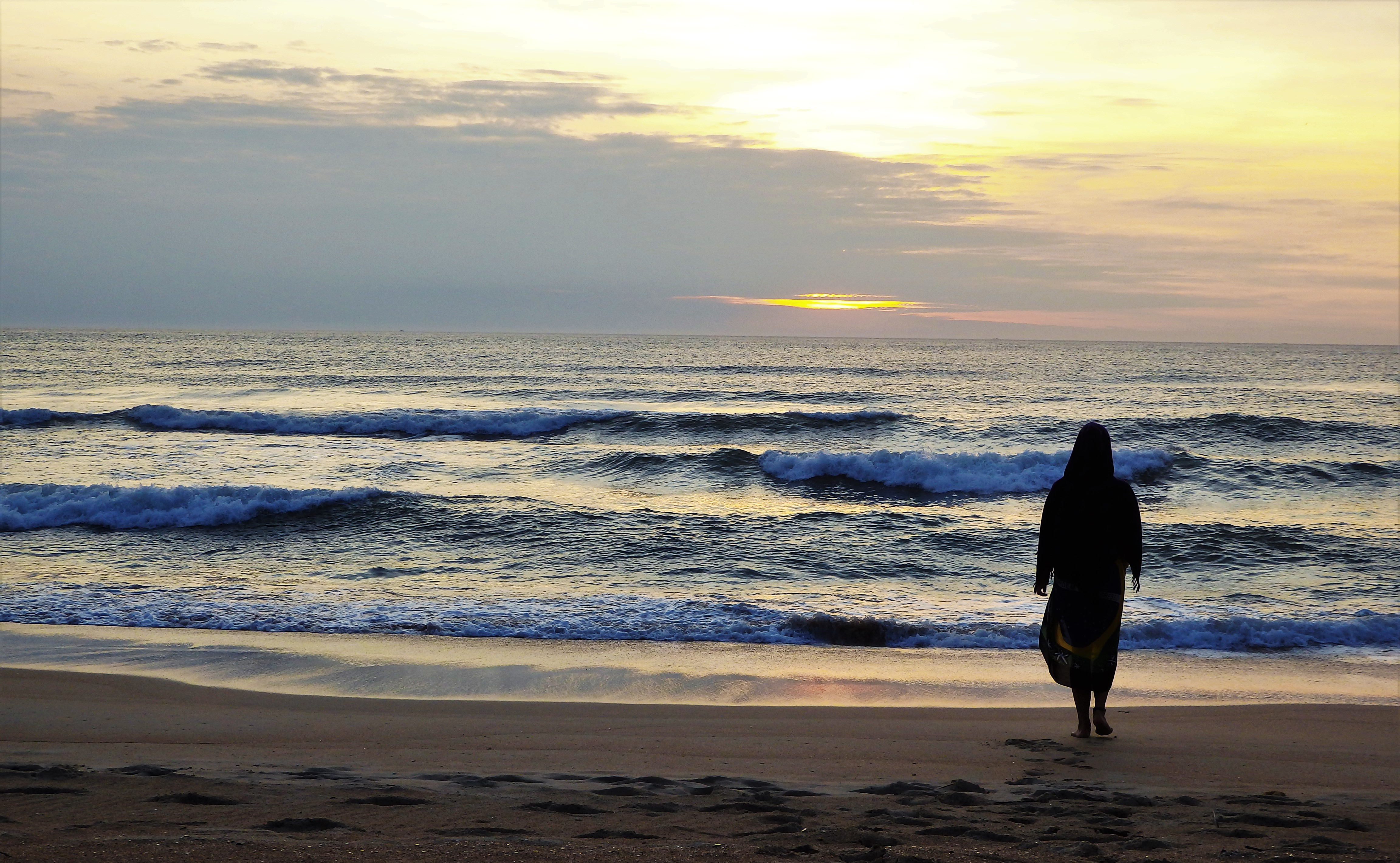 Lagoinha, a small lagoon formed by a river from streams of the surrounding hills, is what gives the name to this paradise place. It is slowly meandering through the valley and nearly meets the ocean on the north side of the beach. That beach seems empty at the first sight but in the bushes separating lagoon and the beach offer a refuge to birds and adventurers who want to hang their hammock and spend the night (or two …). I was about to become one of them …

My trip started at the beach Armação, which led me to the neighbouring Matadeiro beach. This pretty beach was packed with people on Sunday afternoon and only at the end of it I got a slightly remote feeling as I made the first steps on a trail leading to Lagoinha do Leste. It led me through a forest, with ever-changing ups and downs, over rocks and stones. Yeah, it paid off to take proper shoes.

The trail copied the shore most of the time but it led a bit higher up the mountain to provide a look to the center of Santa Catarina Island. There I could recognize Campeche island and even Joaquina beach. Towards the end, the trail uncovered some hidden sea caves, only accessible by a boat. I got to explore them from high up.

Last peak to climb and there it was, just as I remembered it from before, the almost deserted beach and lagoon behind it. I followed the trail down and finally my feet touched the soft sand of the beach. The evening was falling upon us and there were a few people playing in the wam waters of the lagoon. I decided to leave my swim for the next day so that I would not wet my hair at night but, as it happens, the nature had other plans with me … A night in the jungle

As my temporary home, I chose the sandbank on the southern part of the beach covered by bushes and trees that provide a shady canopy. I hung my hammock between two trees facing the lagoon. The night was slowly falling upon me and even the sounds of singing birds were replaced by cicadas.

As the evening fell, the clouds hanging on the surrounding hills grew thicker and sounds of thunder were signs of a coming-up storm. The drama was happening above those clouds; every once in a while they lit up and sound of a thunder scared all living things in the jungle. Only the fireflies didn’t seem to mind, their little green lights were dancing around the dunes and between the trees. The ocean was wild and it was just a matter of time when the rain comes.

Oh yeah, I had to pack my hammock and sleeping bag, there was nowhere to hide it from the rain so I just sat on them, protecting them with my own body, getting myself wet instead. Luckily the rain didn’t take too long and the wind that started blowing right after it, helped me dry my sleeping bag a bit.

Shortly before sunrise, the stars of the southern sky showed and I could recognize good old Southern Cross with Centaur and the fighter Orion, hanging there upside down. 🙂

Life at Lagoinha do Leste reminds of “The Beach” book, a beach resort for people who don’t like beach resorts. People live here, capture water from the streams that are running down the nearby hills, fishing their meals, running, walking and swimming or taking a sunbath.

For one night and two days I got to experience it as well. Of course I had to wake up to watch the sunrise. The sea was calm after the stormy night and the skies almost clear, the air was fresh and warm, even though it was six in the morning.

To take with: Good hiking shoes make walking easier but the hike can be done in flip-flops. Swim suit, repellent perhaps. No white clothes, get ready to face some mud. If planning to stay over night, hammock or tent, sleeping bag, enough drinking water or water purification drops or pills and some food or fishing equipment.

How to get there: Any bus or a car lift (in Portuguese called “carona”) heading towards south-eastern part of the Santa Catarina island, you can start the hike either from Praia Armação or further south, from Pântano do Sul.

Other treks in the area: Barra da Lagoa – Praia da Galheta, Praia da Lagoinha do Leste, A natural massage under a waterfall at Lagoa do Peri, Trilha para Costa da Lagoa, From Santinho to Moçambique beach, The Trail of Three Secret Beaches, Barefoot walk to Naufragados.