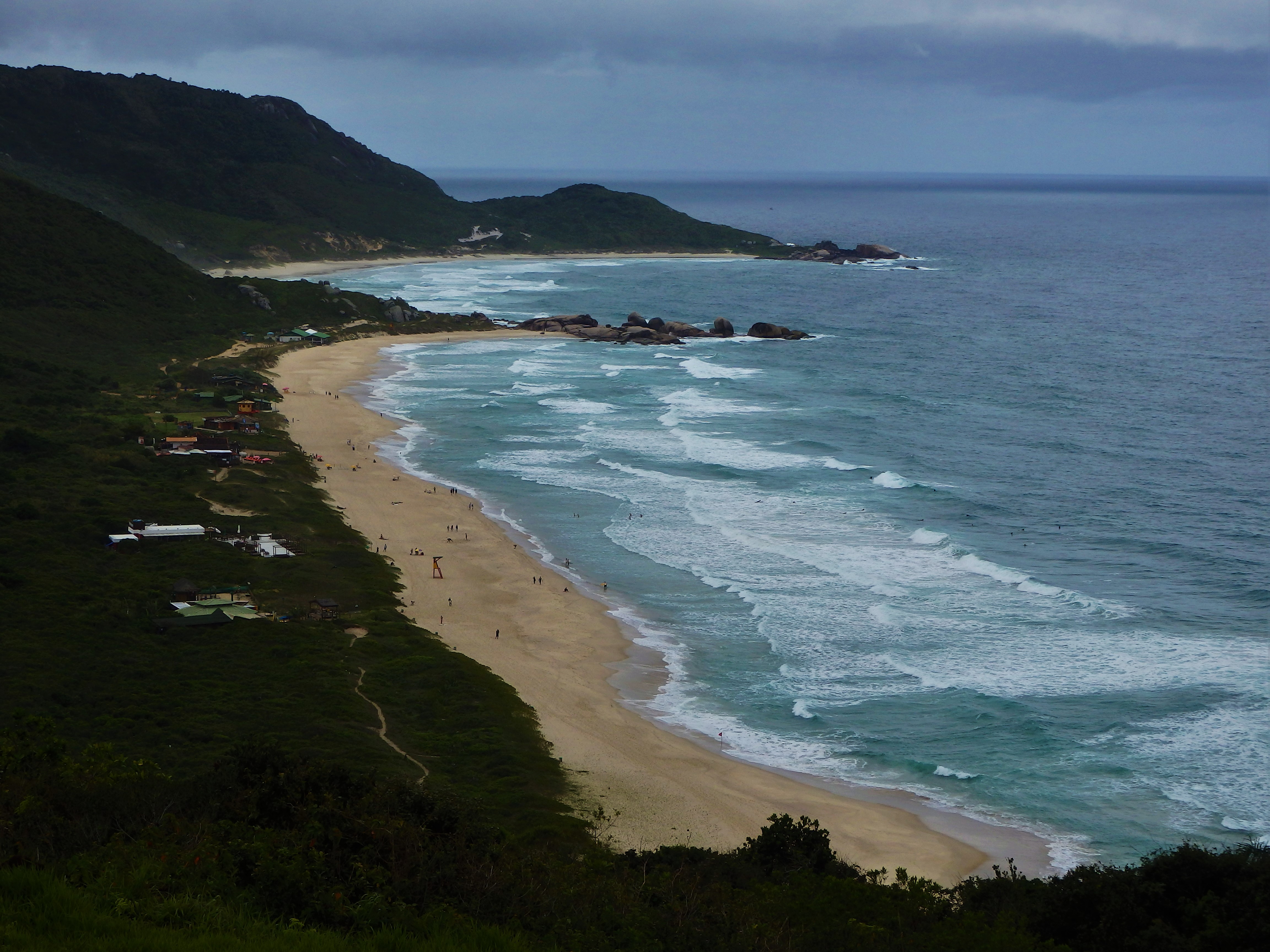 Santa Catarina island has altogether 42 beaches. Some are tiny, some stretch for miles and miles. Some are filled with tourists, some are more remote. On sunny days though, all of them have beautiful turquoise colour and provide the necessary refreshment when the heat becomes unbearable.

Being well situated in the center of the island, in Lagoa da Conceição, I got a chance to see and explore the best known beaches around here, as well as in the south of the island, all on the east coast. Let me tell you my impression about each of them. Let’s start from the most northern one and move slowly to the south of the island. By the way, it is absolutely possible to walk the entire coast. 😉

This is a typical resort-like beach. But let’s forget the hotels around, the truth is, the beach itself is really pretty, on both sides lined by rocky cliffs. What’s special about this place is that it is a place of findings of inscriptions of the aboriginal people, dating back five thousand years. Santinho got its name by one of the famous carvings found, a carving of a person with a circle around his head that reminded of a saint “Santinho”.

This 7,5 km long beach stretches between a hill called Ponta das Aranhas and Barra da Lagoa. It is lined by pine forests and dunes on the far end, close to Ponta das Aranhas. Its far end has less people and the sea is calmer for swimming while its central part is favoured by surfers. It is a pretty beach walk, tiring as well but you can always find your hiding place in the pine forests. Or ride it on a horse back. 🙂

This is one of few beaches in this area that has all comforts of hostels, hotels, restaurants and bars serving you right on the beach. The sea in this part is also much more quiet and good for swimming and even learning to surf. 😉 And if you’re not a fan of crowded beaches, walk the bridge over the canal and then turn left. In only 2 minutes walking you’ll discover a cute small beach – Prainha.

There is actually a trail that takes you from Barra da Lagoa to Praia Galheta. It’s only one hour walk with some stunning views over Moçambique beach, Barra da Lagoa and Lagoa da Conceição. Galheta is an official nudist beach but not everybody here gets naked, it’s your choice. 🙂 Being accessible only by trails or through Mole beach, Galheta is very pretty and natural looking. It’s definitely worth seeing!

One of the best-known beaches and nearest to Lagoa da Conceição (only 45 minutes on foot). The beach has a few restaurants, while it remains natural and well-preserved. It has some strong currents so make sure you don’t swim too far from the shore, unless you want to get rescued by handsome lifeguards. 😉

Because it is not as easily accessed as other beaches, Gravatá belongs to the kind of “secret” beaches. There is a cca 30-minute trail leading there from the road or – if you like walking on boulders/climbing – you can try to get there from Mole beach. Make sure you leave no trace and carry all your trash, it is a natural place. The beach is protected by rocks and does not get washed off by big waves. Therefore it is perfect for swimming or even snorkeling, yes, there are some pretty, colourful small fish around here. 🙂

Joaquina is where the cool surfers hang out while it is not an easy one for beginners. It has a few hotels and bars but does not get too overcrowded. Well, at least not on its entire length. Joaquina stretches further south, along the dunes until it meets with Campeche beach.

It is a nice, long beach with calmer sea thanks to the Campeche island standing nearby, protecting it from wild waves. If you’re a good swimmer, you can try to reach those 2 km on your own. Or … take a boat from Barra da Lagoa and experience its natural and preserved beauty through, swimming, snorkeling and sunbathing. 🙂

We are now slowly approaching the beautiful, green and natural south of the island. Although Armação is still pretty easily accessible by road and has a few restaurants around. It might have a feel of a family place.

Meaning “slaughterhouse”, this beach is truly a beauty. When the “right” waves come, the surfers like to head this direction. 🙂 It gets a but overcrowded over the weekend but that doesn’t take away its beauty. Matadeiro is also a starting point of one of two trails leading to the next beach – Lagoinha do Leste.

This is a true beauty! It takes some effort to get here, you can take a 2 to 3 hour trail from Matadeiro beach or from Pântano do Sul there is either 1 hour hike or a boat ride option. For this reason this beach never gets too overcrowded. Once you arrive, there is still so much to explore around. You can hike into the depth of the valley where river-like, slowly meandering lagoon begins or climb the nearby mountain full of rugged rocks, probably left by its volcanic active times ages ago. Secret tip: pack a tent or a hammock and spend a night here, it’s definitely worth it! 😉

This is the largest beach on the southern coast of Santa Catarina island. It’s large, it has restaurants and bars, it is accessible by car, and it is sheltered by coastal rocks from both sides so the sea is more quiet and easier to swim in.

Solitude beach will give you a sense of being alone while hiking there takes only half an hour on a paved path. You can find the trail at the end of Pântano do Sul. And if you get hungry while swimming and sunbathing here, there’s a cute little fisherman’s restaurant.

In the very southern tip of Santa Catarina island there’s another of the lonely beaches, only accessible by boat or walking (about 1 hour), the “castaway” beach. If you like to explore, take a walk to the lighthouse from where you can nearly touch the mainland. Also this place has two fisherman’s restaurants, a campground and nice waves. 🙂