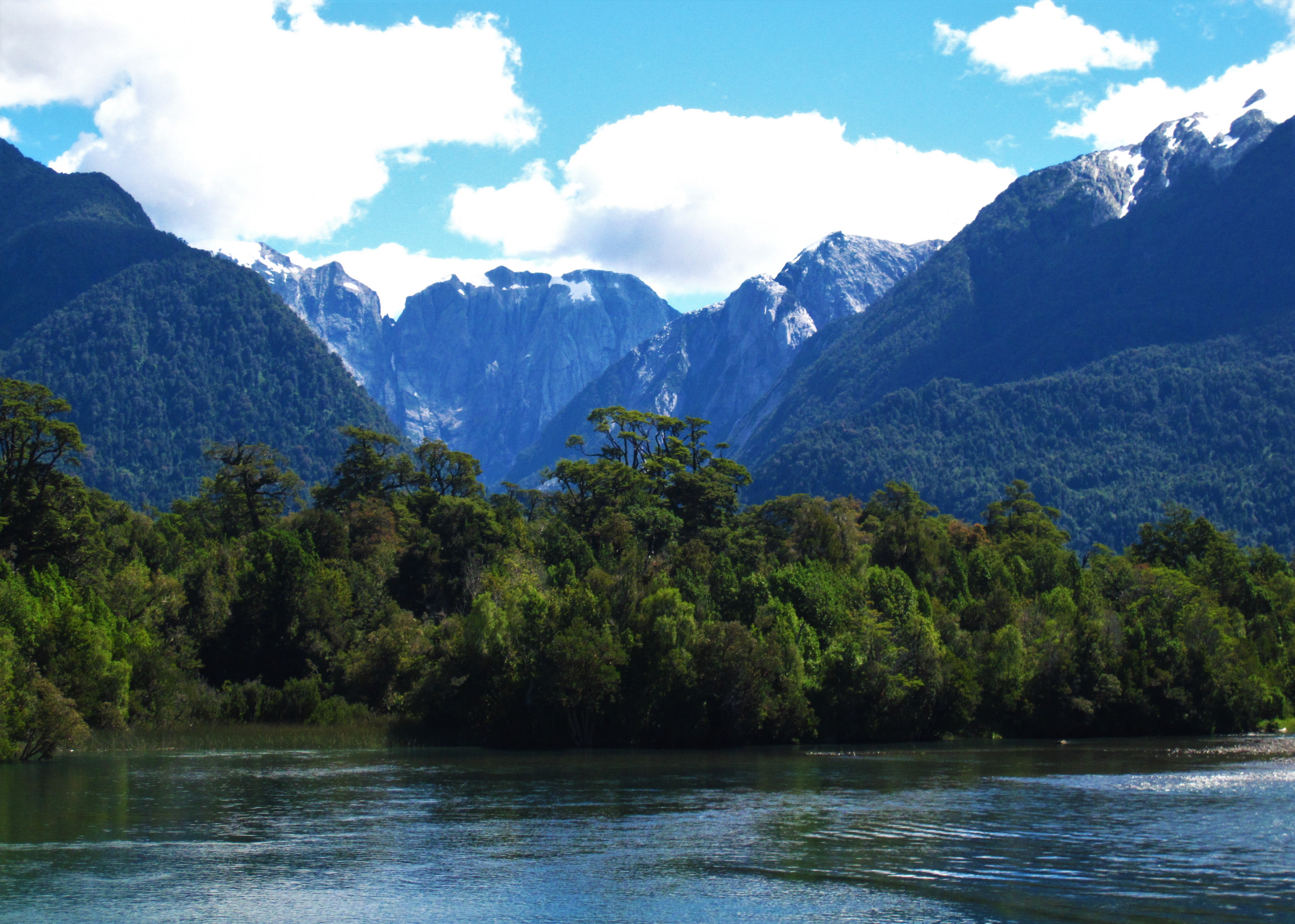 Mountains reaching high above the clouds, it was a rather misty and cloudy day. Despite that, all I saw was simply amazing! When watching a waterfall, dropping off a glacier up the high cliff, I thought: “O beautiful nature, I humbly bow before you!” The air smelled like adventure and there was this mystery waiting ahead, promising that from now on … anything could happen. 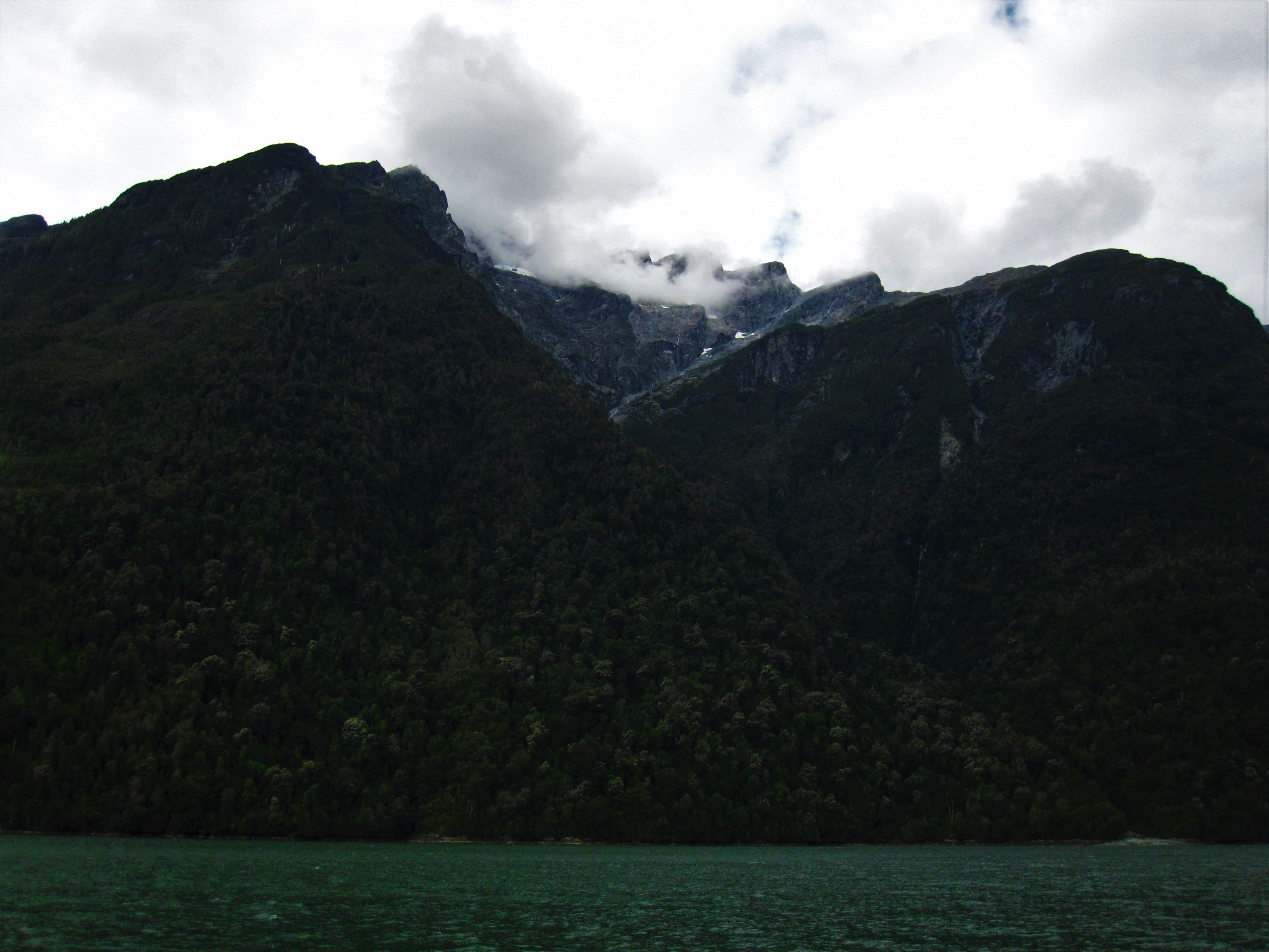 I was travelling on a bus from Puerto Montt, down towards Carretera Austral and Parque Pumalín. Once we reached Reloncaví fjord, a ferry took us across and continued on the land for another hour or two until reaching a little town called Hornopirén. From there the bus loaded on yet another ferry and set on a long sailing trip through the coast, split into pieces by fjords. The journey offered these magnificent views.

After all-day drive over the land and sea, we crossed the last of the fjords, called Reñihue, arriving in a small settlement and a campsite Caleta Gonzalo which is one of the most popular starting points for short hikes into the lush green rain forests, rivers and waterfalls.

The campsite was hidden on the other side of a small wooden bridge that stretched across a little creek, surrounded by trees and bushes. There are even showers there but let’s say they are rather refreshing. I could pitch my tent right in the middle of green meadows and their fresh green grass tempted me to take off my shoes dance barefoot, jumping and twisting, falling on the soft ground and jumping up again, till I dropped breathlessly! One of the ways to enjoy my freedom.

There are plenty of long and short hikes in the area and one may reconnect with nature while walking through an old rain forest and along a river. Ancient trees and giant ferns serve as a hiding place for birds, whose songs provide a relaxing background. The rivers form cascade waterfalls, dropping into pools and an overhanging rock are weeping drops of water from tiny streams high up the top of it all. Thirsty? There’s nothing easier than diving your face into the crystal clear water and drink as much as you can take. Just like the animals do, it’s fun, try it! 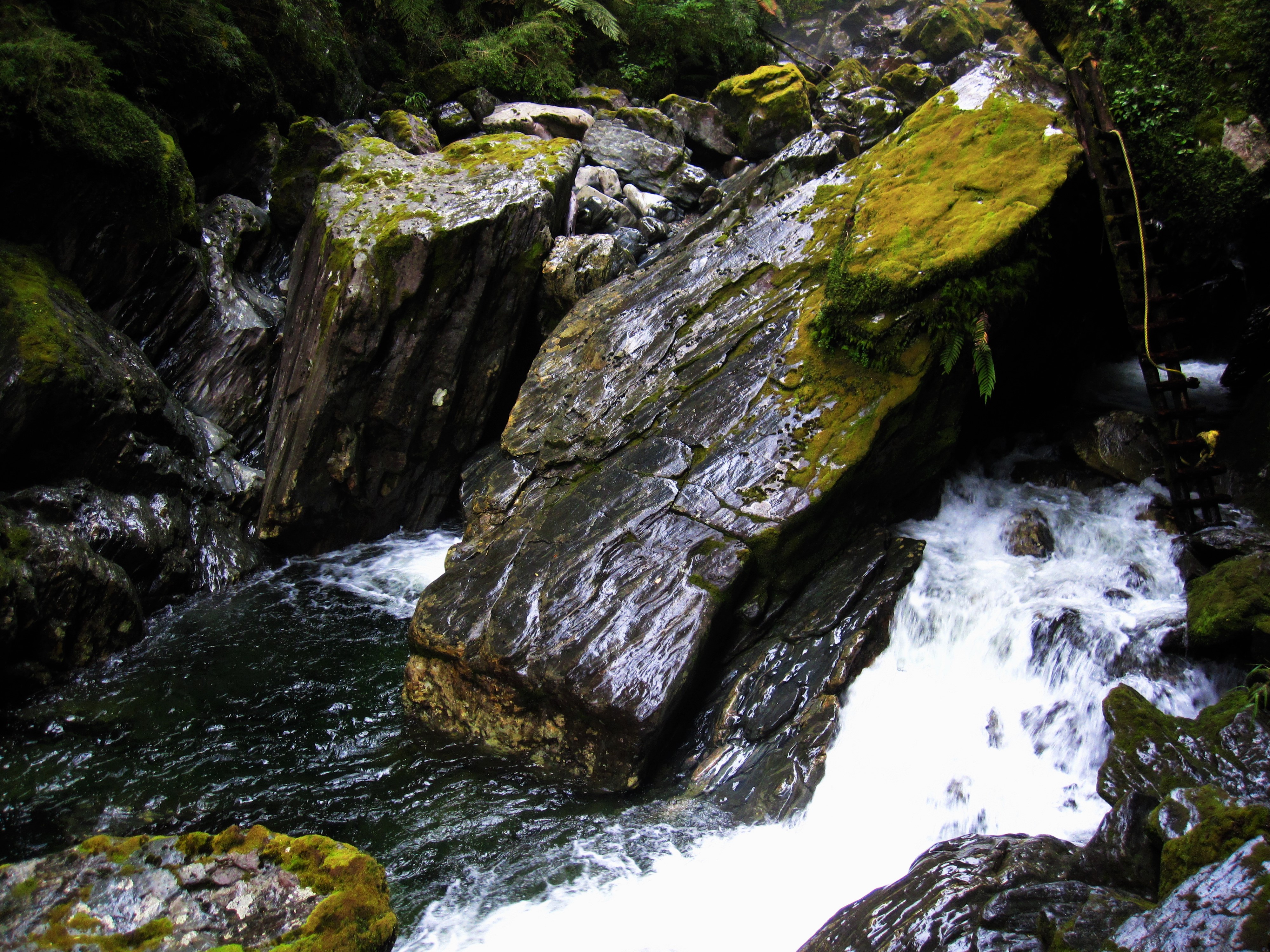 The Pumalín Project began in 1991, when Californian Douglas Tompkins acquired the 42,000-acre Reñihué Farm to protect its primaeval native temperate rain forest, at risk for logging. Doug first visited Chile in 1961, and returned regularly to climb, ski, kayak, and hike throughout the southern region. After years in business—as the founder of The North Face and co-founder of Espirit—he sought to contribute toward protecting the Earth’s last remaining wilderness and combating the global extinction crisis (read more on our conservation ethic here). Vast, remote, but facing numerous ecological threats, south Chile offered major opportunities for large-scale conservation.

The vision for Pumalín Park soon grew to encompass a much larger protected area, with full public access. Between 1991 and 1998, The Conservation Land Trust, the foundation Doug created, acquired close to 700,000 additional acres, 98% from absentee landowners. To encourage Chileans and citizens of the world to experience these unique and spectacular landscapes, CLT developed a network of cabins, campgrounds, trails, information centres, and other public facilities.
Source: Pumalín Park and Project

I saw Douglas Tompkins walking by the Tourist information office and I thought, it would be great if I could take a photo of him to accompany an article I was planning to write about the Pumalín Project. But somehow I guess I felt too shy about begging for a photo, which I regretted later that evening.

I could call it a traveller’s luck when I hitch-hiked on a road in Chaitén the next day and the car that stopped was Douglas himself and two ladies – Ingrid (who worked for the Park) and Astrid from Spain (a biologist who was going to cooperate with Douglas in fundraising to support his projects in Europe). I didn’t have any objection to travelling along with them on a slow pace, with Douglas explaining us about the Park and its surroundings.

There are several organic farms in Park Pumalín. They strive to offer park visitors and other landowners a model of more ecologically minded management practices, of “conservation as a consequence of production”. Their restored pastures provide a buffer zone to the adjacent parklands, providing habitat for native species. Organic gardens and berry plantations provide a decent agricultural yield while maintaining the health of soils and the surrounding ecosystem. The main activities have been raising sheep and cattle, producing native forest honey, and growing fruit and vegetables for local consumption. A significant percentage of each farm remains in its natural, untouched state, allowing agricultural productivity to exist in harmony with the native forest.

We kept driving through until reaching a stunningly beautiful valley with the landscape changing from acres and acres of wild forests, high rocky mountains and a few glaciers appearing on the tops of them. In a town called Futalefú (which means the Rio Grande in Mapuche language) we were not so far to the Argentinean border. One look back to say goodbye to beautiful Parque Pumalín.