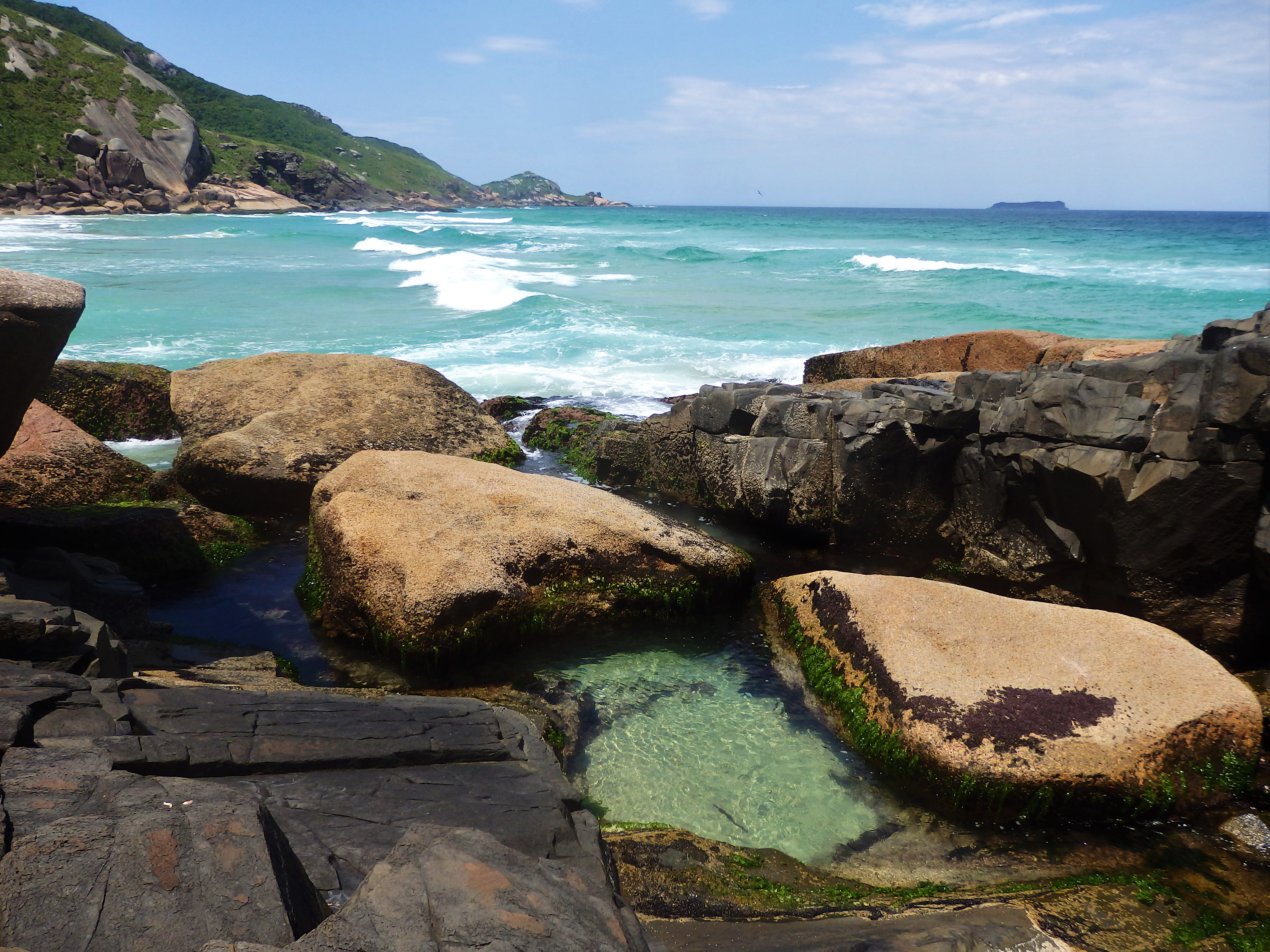 Wanna know the most beautiful, deserted secret beaches on Santa Catarina island? Are you ready for some muddy walk, to drag yourself through abundant vegetation, to climb on coastal boulders and even to spill a bit of your blood? Then read on, the Three Secret Beaches trail has finally been walked and discovered. 😉

This trail has been on my mind for too long, I walked parts of it, I went to the secret beach number 1 but kept postponing walking behind that hill, the one that withheld more secrets.

I started in a small beach called Gravatá. It has a single fisherman’s hut there and rocks that get washed off by wild ocean, just to protect you and offer a quiet place to swim or dive. Some of those rocks are fun do dive from. 🙂

But not today … instead I took a tiny trail that leads to the secret beach number 1, the one that only the locals know about and often enjoy some swimming, sunbathing and surfing in. The trail is lined by thorn like gravatá plants that like to cut through your skin and take a few drops of your blood.

Parts of the trail became so wildly covered by the vegetation that it felt almost like swimming through a green sea.

But just hold on, from here the secret beach can already be seen:

Well, there is another, easier trail that leads here but it is the secret of the locals, so … 🙂

After some time to enjoy my solitude, swim and chilling on one of the boulders, I set on the path, looking for trail that takes me further, to places that have so far been hiding to me but that provoke my curiosity to a strong desire to find out what’s out there.

I climbed the hill, finding a small path that actually only led me into a trap of more thorny plant and thick bushes. Would I give up? Never! Because, well, what’s ahead of me looks too tempting:

Second attempt led on the coastal rocks and I totally enjoyed some barefoot free climbing, when my heart stopped as I looked back what was awaiting me below if I failed. I was lucky to be here on a low tide. And it was low tide that uncovered the beauty of these beaches. So here it was, the secret beach number 2:

I couldn’t resist to have one more swim before I set on my journey again. Up the hill, walking barefoot on smooth grass of a hill meadow, this was definitely the easiest part of the hike. It didn’t take too long till the third secret beach uncovered its beauty to me:

It is full of these giant boulders and one could get lost in the tiny holes and caves they create or just simply lie one one of them after a swim in the turquoise waters.

Walking further on the rocks, I discovered tiny pools, welcoming me to dip in. Walking further barefoot on hot stones, I reached almost the end of the trail, just before Joaquina beach uncovered itself, I had a choice, take an easy walking path up a small hill or have some fun traversing on rocks like this: 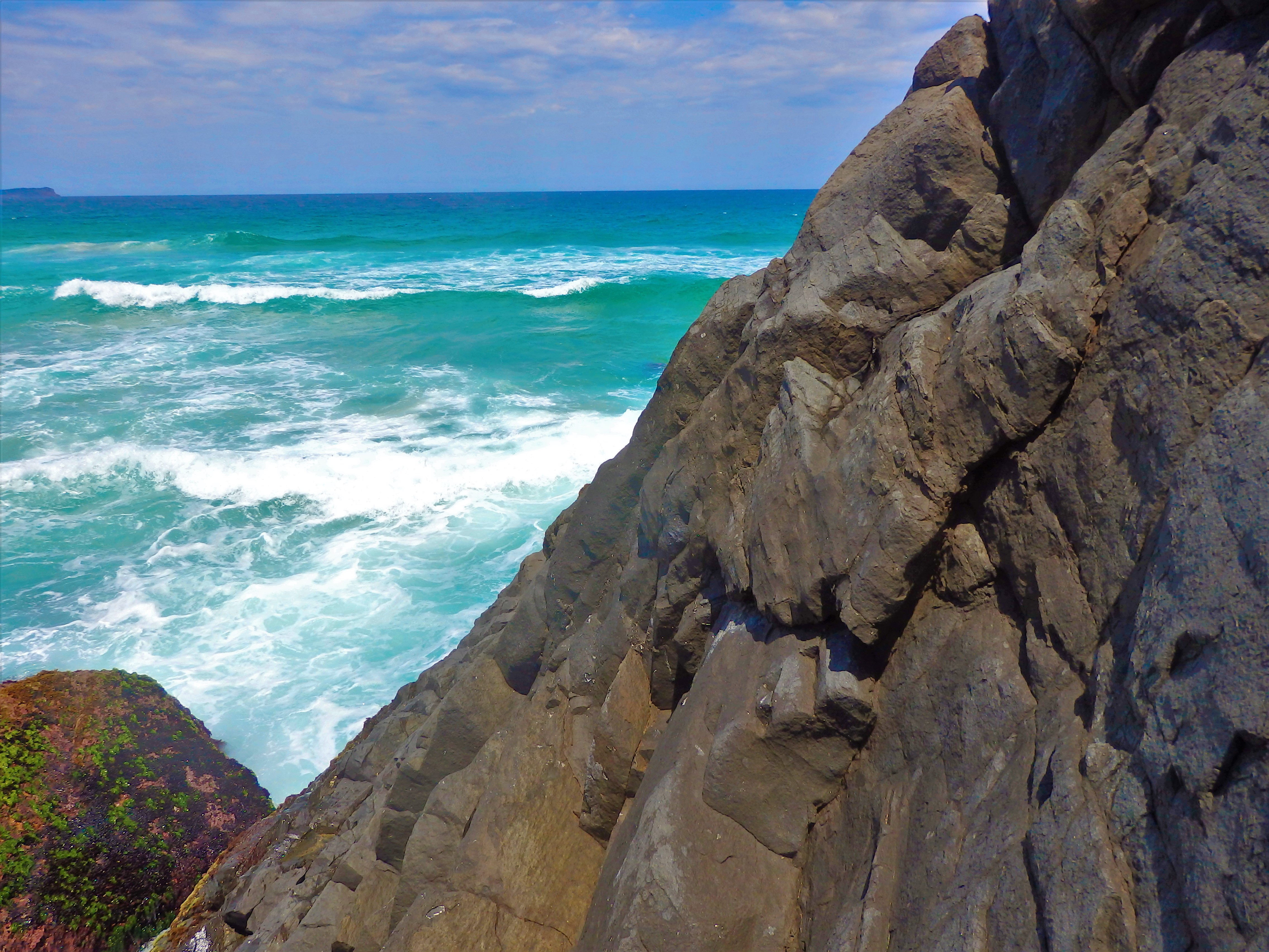 Guess what I chose! 🙂 And then the time came to bid farewell to this paradise-like forgotten world …

… and walk through some mud on some one’s backyard just before reaching the overwhelmingly crowded Joaquina beach. 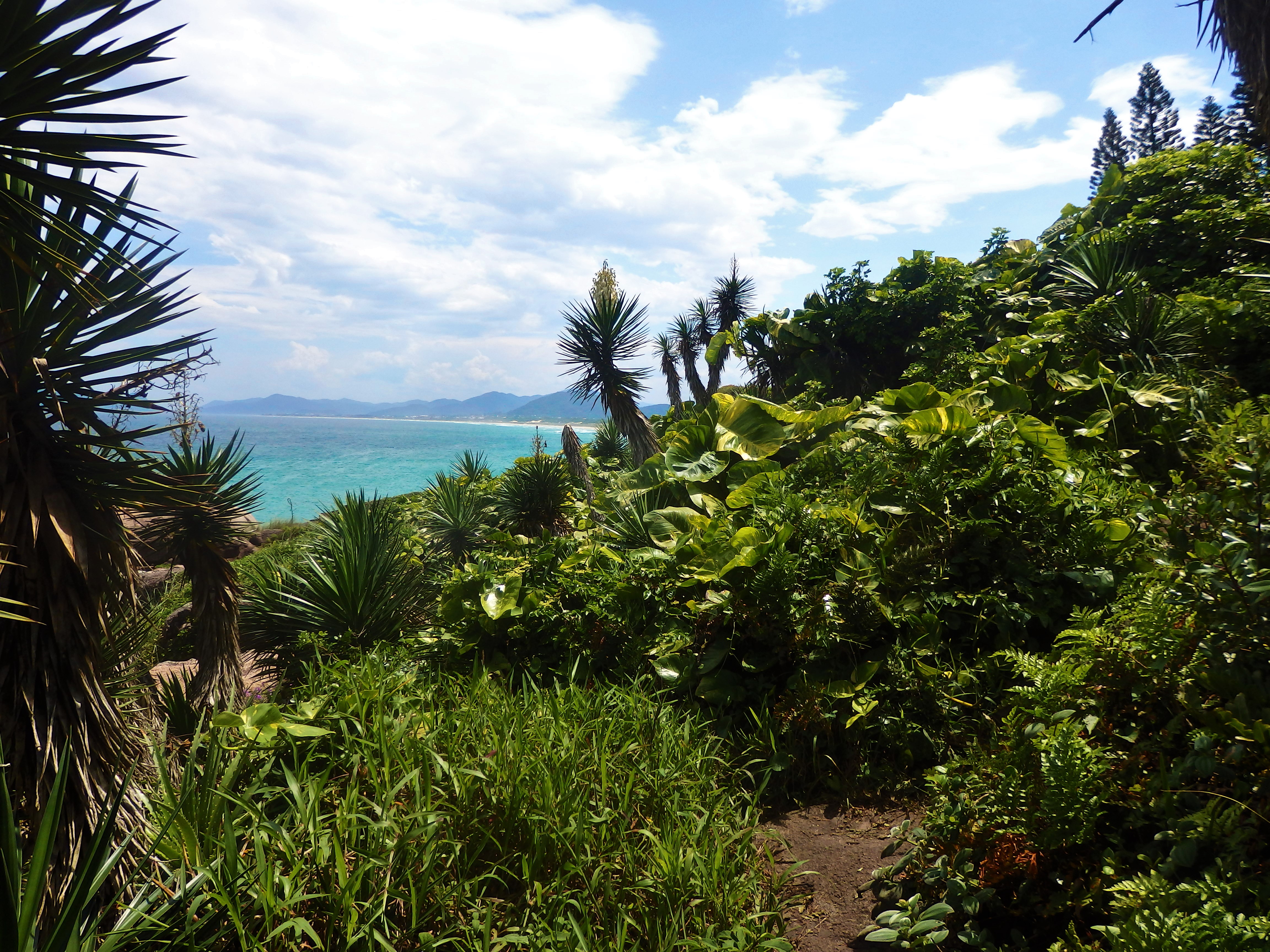 Other treks in the area: Barra da Lagoa – Praia da Galheta, Stormy night at Lagoinha do Leste, Praia da Lagoinha do Leste, A natural massage under a waterfall at Lagoa do Peri, Trilha para Costa da Lagoa, From Santinho to Moçambique beach, Barefoot walk to Naufragados.