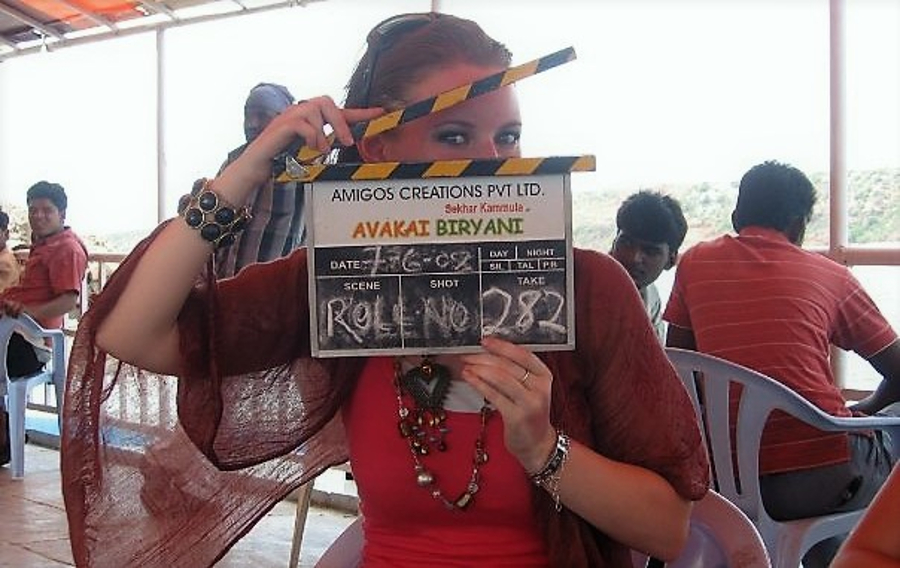 Rickshaw driver asking the directions from people in the street after he reassured you that he certainly knows the way, a daily bucket shower routine but also countless wedding invitations, photos with the locals and also … the chance to take part as an extra in Indian movie shooting.

I’m not talking about being just a tourist in India. If you decide to spend more time here, you will have to get used to many things, adjust your lifestyle, swallow your pride … it won’t be easy but one thing is sure, in return you will get an unforgettable experience that stays with you for the rest of your life.

The opportunity to work in movie industry is not something you seek, most likely it finds you first. Just as our movie agent Ramesh found us. He simply knew where the foreigners live and he showed up in our flat every once in a while to offer us all kinds of jobs. We took the roles of hostesses on business events, we were cheerleaders at a cricket game, we played in commercials for local airport and also took part in Indian Tollywood movie shooting.

Just like Bollywood is a big thing in Mumbai (Bombay), Tollywood is a movie industry product in a city called Hyderabad. The movies are made in the regional language Telugu, which is spoken in Andhra Pradesh state of India. In Hyderabad, there is also one of the greatest movie production centers in India called Ramoji Film City.

With 6 millions of inhabitants, Hyderabad is the sixth greatest city in India. It is the capital of two Indian states: Telangana and Andhra Pradesh. There are almost equal numbers of Hindus and Muslims living in the city. Nowadays the city is best known for its fast-growing IT industry.

Marcelo made a career playing in Indian movies

Marcelo is from Brazil and just like the rest of us, he came to India for a work internship experience via the AIESEC organization. The opportunity to play in movies though, offered him way more richer experience … plus a very pleasant second money income. The most valuable part of it all however, was the chance to get to know Indian culture through meeting their famous actors, traveling to different cities for various movie scenes, or the authentic pop music and dance that play an important role in every movie.

The average office salary is between 15 an 20 thousands rupees. In contrary, for one days at movie shooting you can earn as much as 2.000 rupees.

“The first movie I’ve made was weird and fun. The movie was called Jalsa and two of the most famous Telugu actors were in it: Pawan Kalyan & Ileana D’Cruz. I arrived at the setting and they were asking if anyone knew to play a guitar. I said I did and that’s how I spent most of the night playing the same music, the easiest I knew: “No woman no cry” by Bob Marley! Probably like a hundred times! But it could be worse, the other two people, who were there with me, were supposed to pretend they were kissing, also a hundred times! Really uncomfortable! It was a huge open air studio, all in silence, then they’d screamed: “Background!” – and I started playing the song out loud! And then “Action”, and I continued playing until the end of the scene, gesticulating a lot like a romantic rock star! It was shameful but fun for the first experience.”

A way to get to know India and its culture

As a professional movie extra you will most likely get to see more than the outskirts of the city. The main actor in the Avakai Biryani movie played a rickshaw driver and we as extras played a group of tourists from South Africa. For two days we got to be driven in a rickshaw, laughed and had fun, all with a movie camera attached to this typical Indian vehicle. We visited Nagarjuna sagar water dam, took a boat ride and explored old ruins on an island in the middle of the Krishna river.

Marcelo thanks to his frequent movie shootings traveled around the states Tamil Nadu and Andhra Pradesh. One of them was for example a 20-day bus tour around touristic sights in Andhra Pradesh which goes from arid places to high mountains, holy sites and beautiful beaches. “I even stayed longer at the last location by the beach in Vizag where I became friends with locals and stayed surfing for a week with a couple from Reunion Islands. Those were the only waves I’ve ever seen in India,” remembers Marcelo.

Movie shooting – an experience that changed our lives

Being part of movie shooting in India will certainly change your life in some way. May it be meeting interesting people (for example child actors who give you advice on how to boost your acting career). You will understand the amazing importance of the cinema from both the sides, actively and passively – as an actor and as a spectator. Maybe you get stopped on the street and asked for an autograph.

“It was interesting to understand the movie industry as a microcosms of the Indian society, an authentic product / expression of it and I feel grateful I was able to help a little while showing some of the injustices on that market. Sometimes I used to play as a kind of “syndicate leader” for some students or Indian extras who were being extremely exploited by the industry. For me it was a fleeting thing, for some of them it was a dream coming true or an illusion. Western productions also explores it a lot, attracted to the low price conditions on shooting in India, so it becomes a globalized case of exploitation based on inequality and people’s imagination. For the picture: my earnings were around 2.000 rupees. For Indians in the same position it was 200 or less. Fighting for my rights – it was a big struggle to make the agents keep their words – and trying to show this main scenario, taught me a lot on how to deal with life,” Marcelo describes his experience with working in movie industry.

“Just do it. If you have the opportunity it is an interesting thing to do, but you must relax and lower your expectations. You may spend a full day there, so make no other plans, be patient, discuss the conditions with the agent first and enjoy (or bring a book),” that’s the advice from Marcelo and I’d just like to add that it works well for your India experience as well. Let go of your expectations and let the days just float by. Each and every one of them will bring you unpredictable experiences you will remember for years!