Gokyo lakes with a view of Cho Oyu

After visiting the Everest Base Camp, I could finally get my peaceful rest and warm up at the stove in a hut in Gorak Shop, fully heated by yak droppings dried on the Himalayan sun. My plan was to cross over to the next valley, called Gokyo, after a set of turquoise lakes. The shortest way led over Cho La pass but after talking to a fellow hiker I changed my mind. The monsoon was coming to its end and the weather was still unpredictable and only a few days back someone got lost in this area and died.

After a cold night, sleeping in 5,164 m in Gorak Shop, covered by four thick blankets and woken by a bell, ringing on a nect of a pony, grazing around the shelter, I decided to take a detour route through the valley. 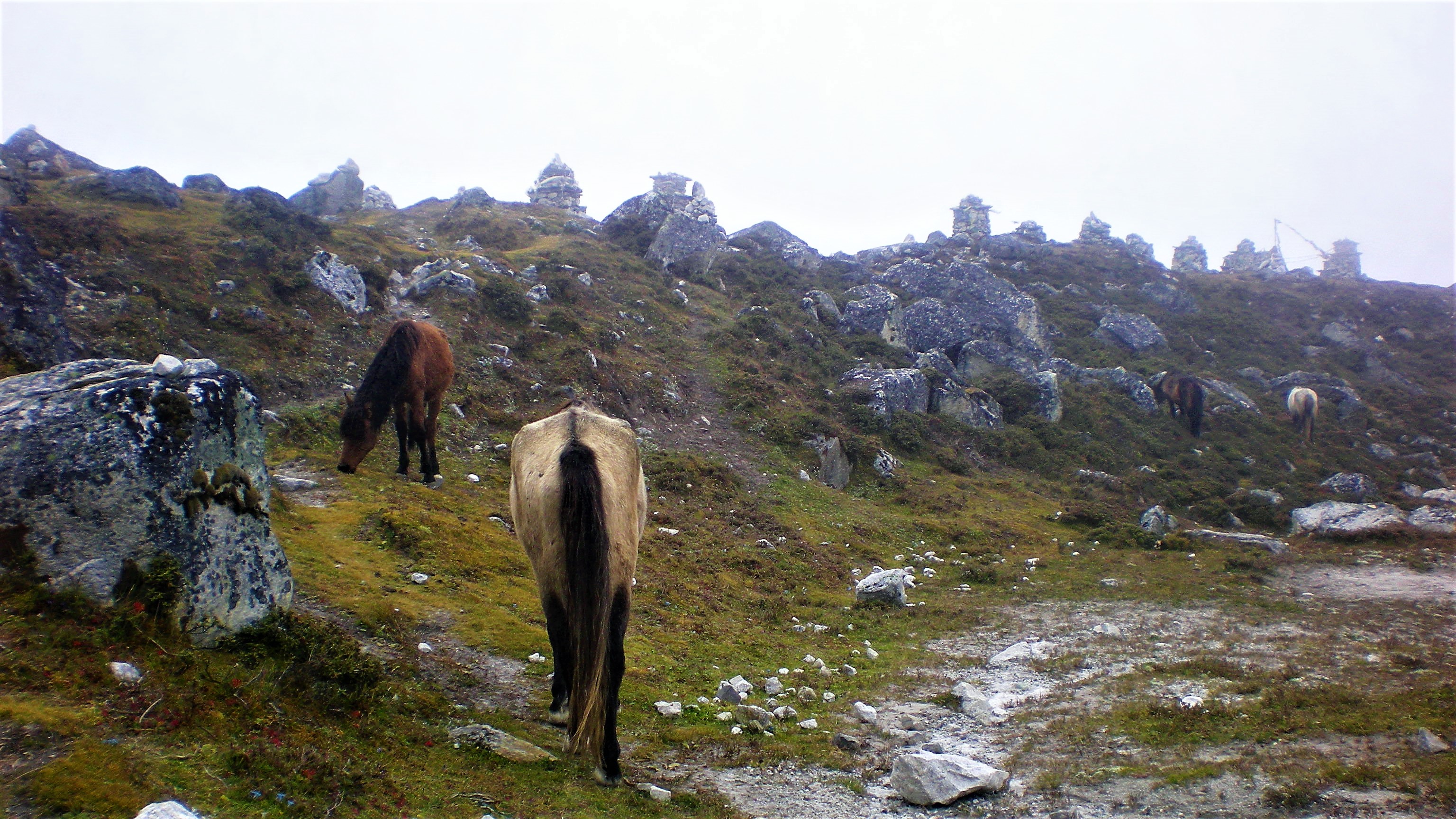 I had no map while wandering in Sagarmatha National Park but the paths were wide and clear, plus it’s not easy to get lost in the valleys in between the 8 thousand meters tall giants with snowy peaks. So I just drew one in the lodge in Gorak Shop. 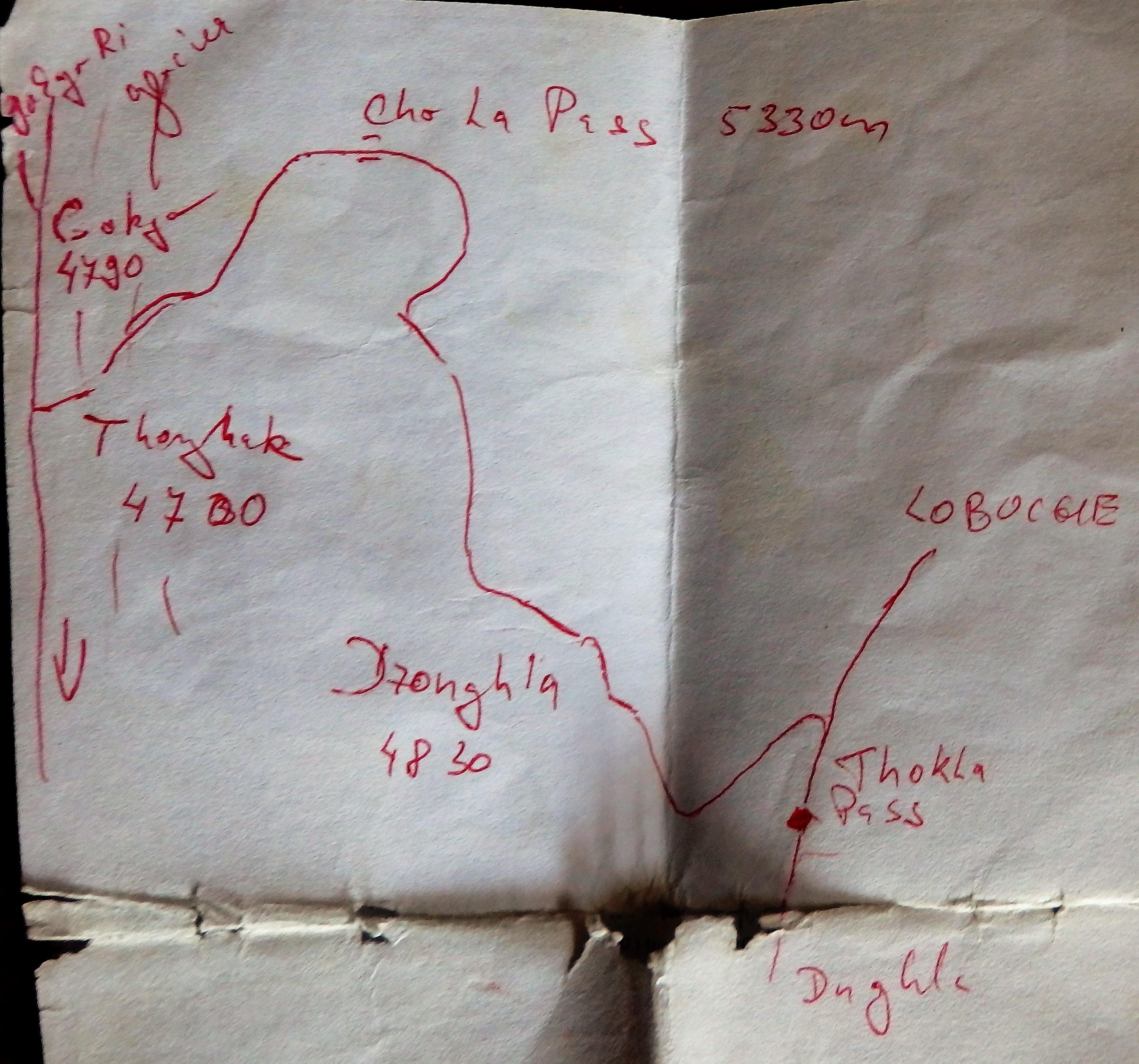 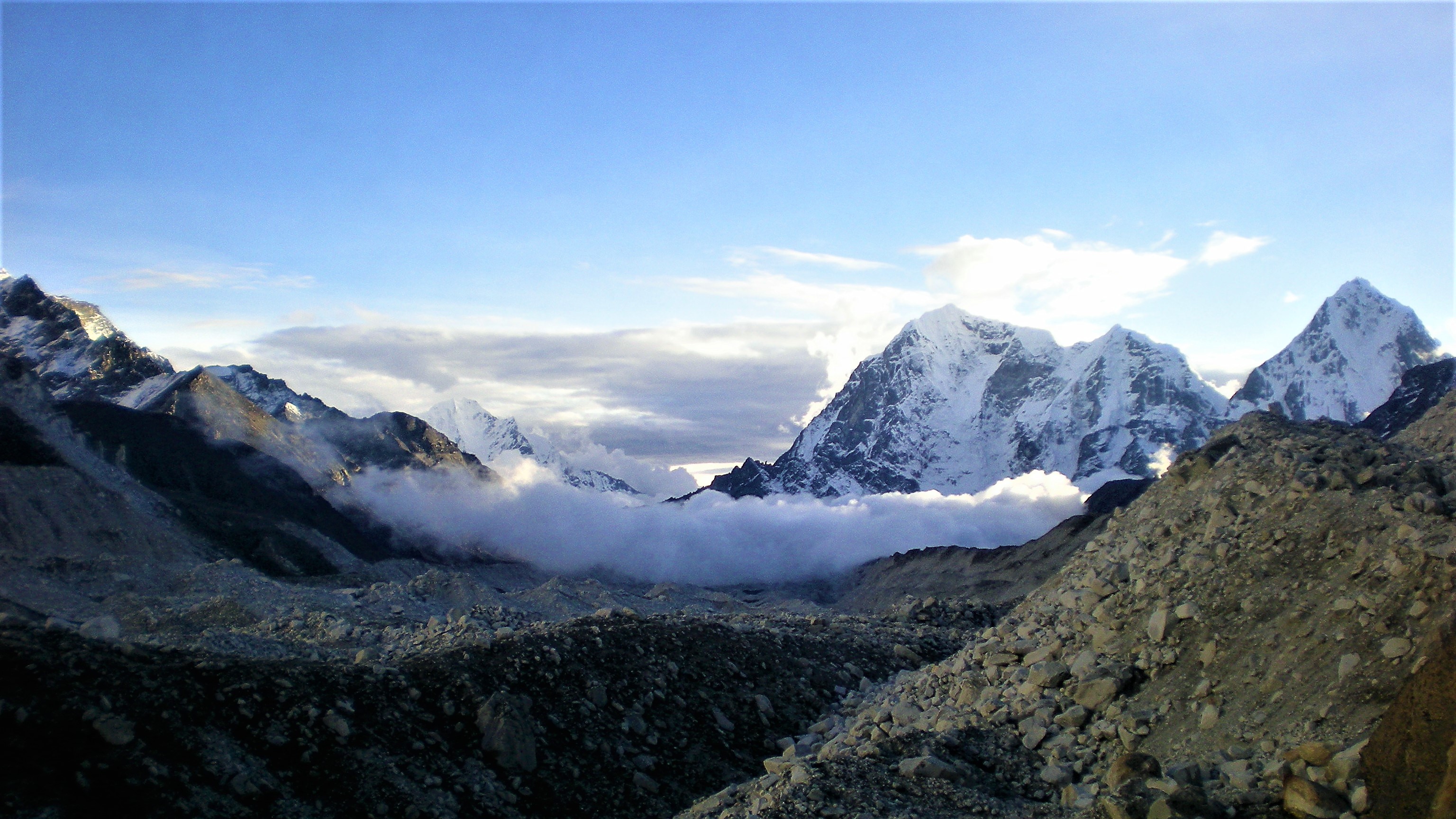 As I started my hike that morning, the weather got worse and there was a thin layer of snow on the ground. The clouds were gathering above my head. It was very cold and my head was spinning from light symptoms of AMS. I was slower than I would have liked to be.

I was curious to learn more about AMS and the two more dangerous diseases occurring in high altitudes so I visited a clinic in Pheriche (4,371 m) – yes, the village I passed before – it was after all a detour.

HACE (High Altitude Cerebral Edema) is swelling of the brain and is characterized by “head trauma” like symptoms. HACE is often fatal and can come rapidly, suspect HACE if you notice any altered level of consciousness, such as: confusion, changes in behavior, hallucinations, seizures, ataxia, fatigue, paralysis of a limb, unconsciousness, coma, difficulty speaking, blindness, multiple vomiting, severe headache.
Treatment:

I ended that day at Phortse (3,840 m), taking a warm shower – finally and eating veg. curry and rice for dinner. Here I could also observe how the locals mold yak droppings and place them on the stone wall to dry. Later they would collect them and use them for burning in the stove. 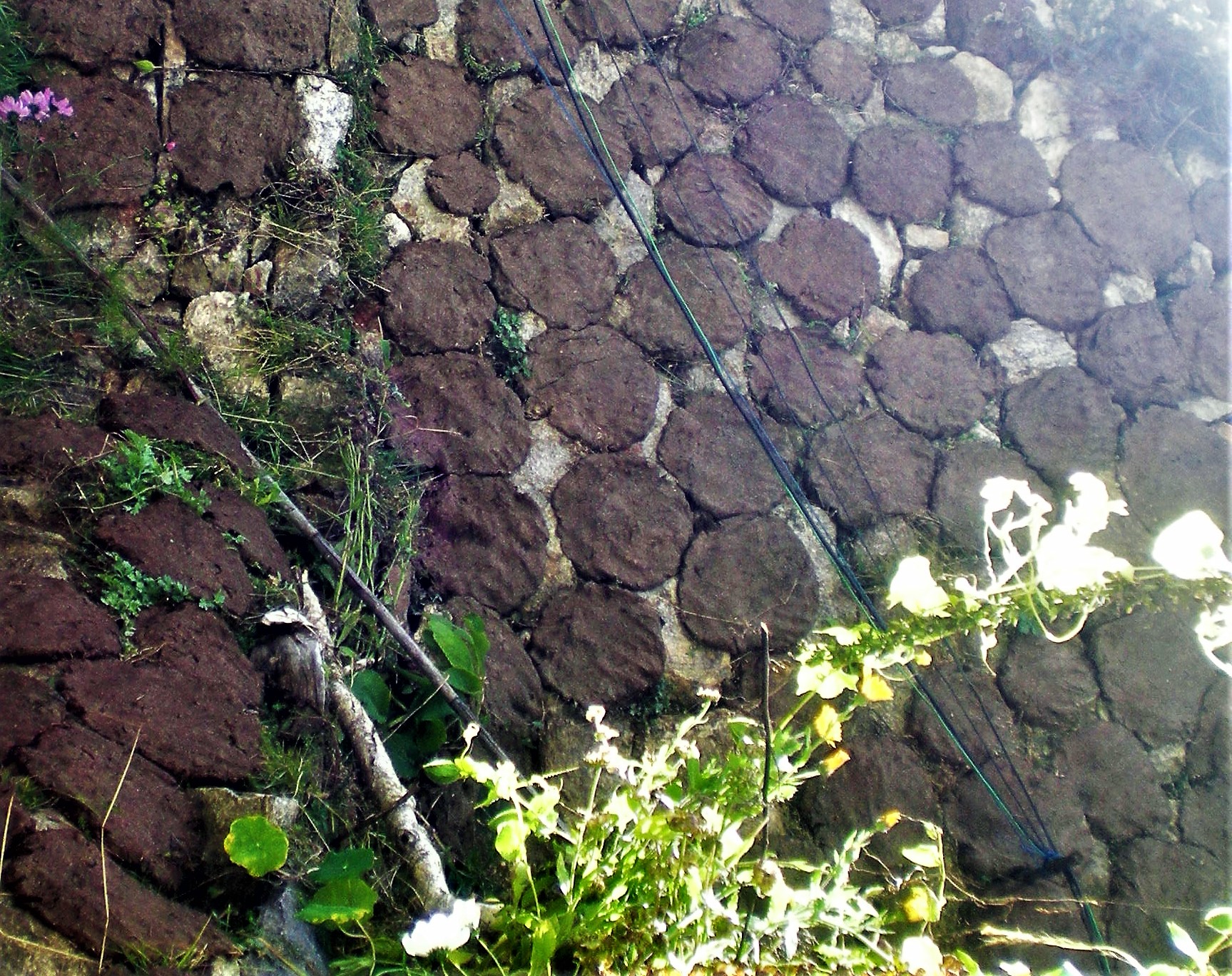 Next day I followed my map through the villages Thulang, Thore, thare, Chhamtyang, Chharchung and Dragnag, following a deep gorge with fast flowing river below. It was raining when I started but as soon as I climbed over 4,000 meters above sea level, the rain turned into snow. The clouds were low and it wasn’t easy to stay on the tiny path. 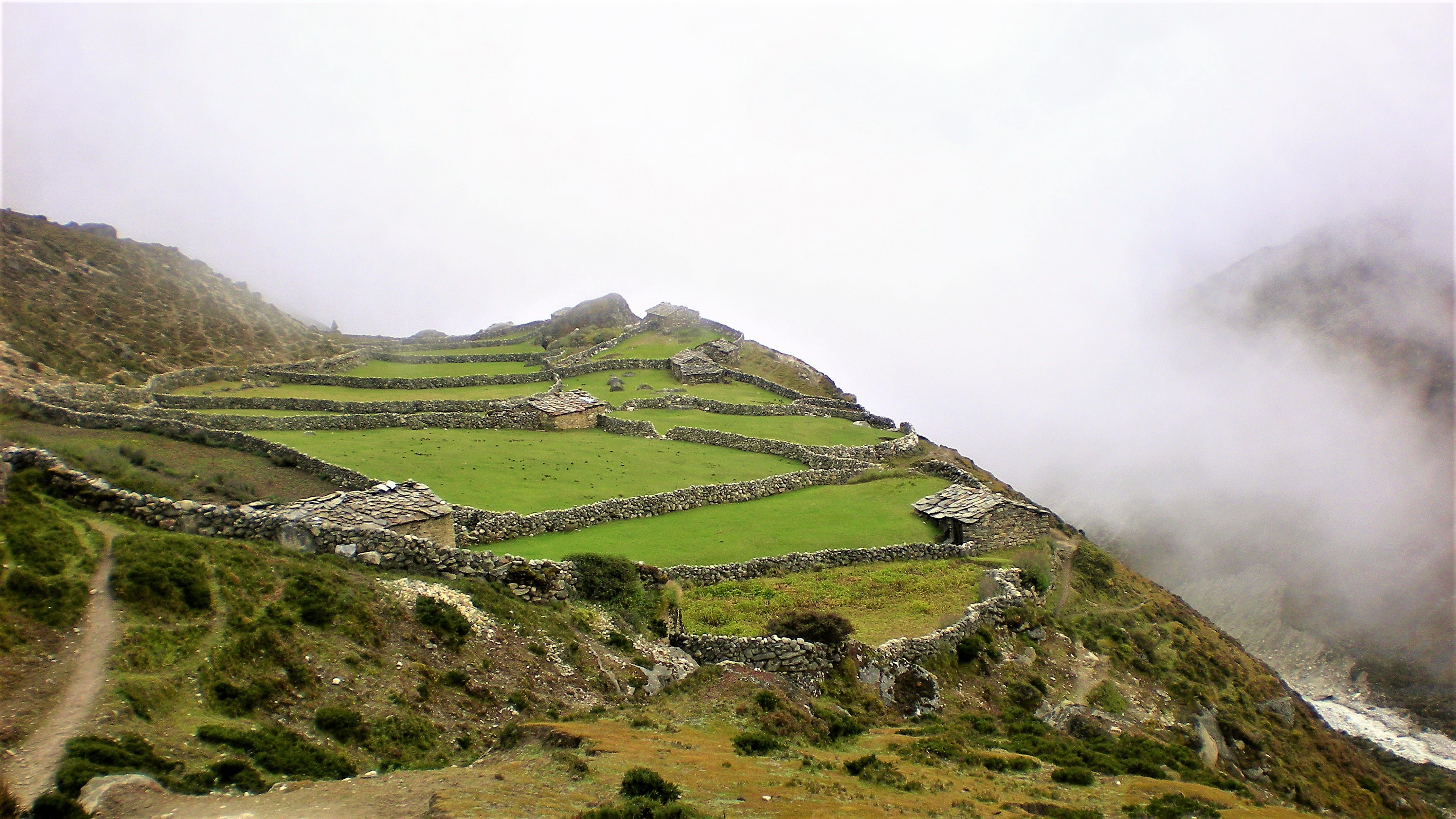 I was happy to reach Dragnag and took a rest from the wet weather, hiding on probably only house and restaurant open in this tiny village. It was afternoon and I was finding the courage to cross the glacier in this weather. Ngozumpa glacier at Gokyo later turns into that fast flowing river I saw deep in the valley on my way up. The other end was hiding my long desired Gokyo.

In Gokyo, I discovered a little house by a lake that was recommended to me by the Englishman who warned me not to cross Cho La. It was run by an nice older lady who favored solo travelers over guided tours so I got a discount for my stay there.

Me and the other guests in the guest house woke up at 4 am, planning to climb Gokyo Ri mountain to watch sunrise. We were an international group, Australians, Germans and Americans with their Nepalese guides who were joking all the way up. Not minding the steep climb in high altitudes, they even had enough breath to sing. It was still cloudy as we started the climb but the clouds gradually opened up some beautiful views. From here we were able to see three (out of 14) Eight-thousanders at once: Mount Everest (8,848 m), Lhotse (8,516 m) and Cho Oyu (8,188 m).

I spent the rest of that day exploring Gokyo valley and two more glacial lakes. They are spread in a chain as you walk up the Ngozumpa glacier, in the direction of Cho Oyu and Tibetan border. The valley and is filled by glacier joiningl glaciers fromt he surrounding valleys. And those open views allowed me to admire the beautiful giant mountains once gain.

Just like on the first night at the hut we planned the sunrise hike at Gokyo Ri, on the second night, me and the three Australians (Jasmine, Craig and Alex) planned to cross Renjo Pass instead of a boring hike down the valley. Before setting off on that challenging hike all of us received a cup of hot chocolate and a pack f biscuits from the landlady.

We started following the lake around on the left and Gokyo Ri on the right and then started a steep climb up into the mountain range. About half way up we reached a plateau with a small river, frozen over with a crust of ice. The view was terrific – as almost everywhere in this area. Even steeper climb was ahead of us from there, in the land of pure rock and snow. The bright sun was reflecting in the snow, blinding us. 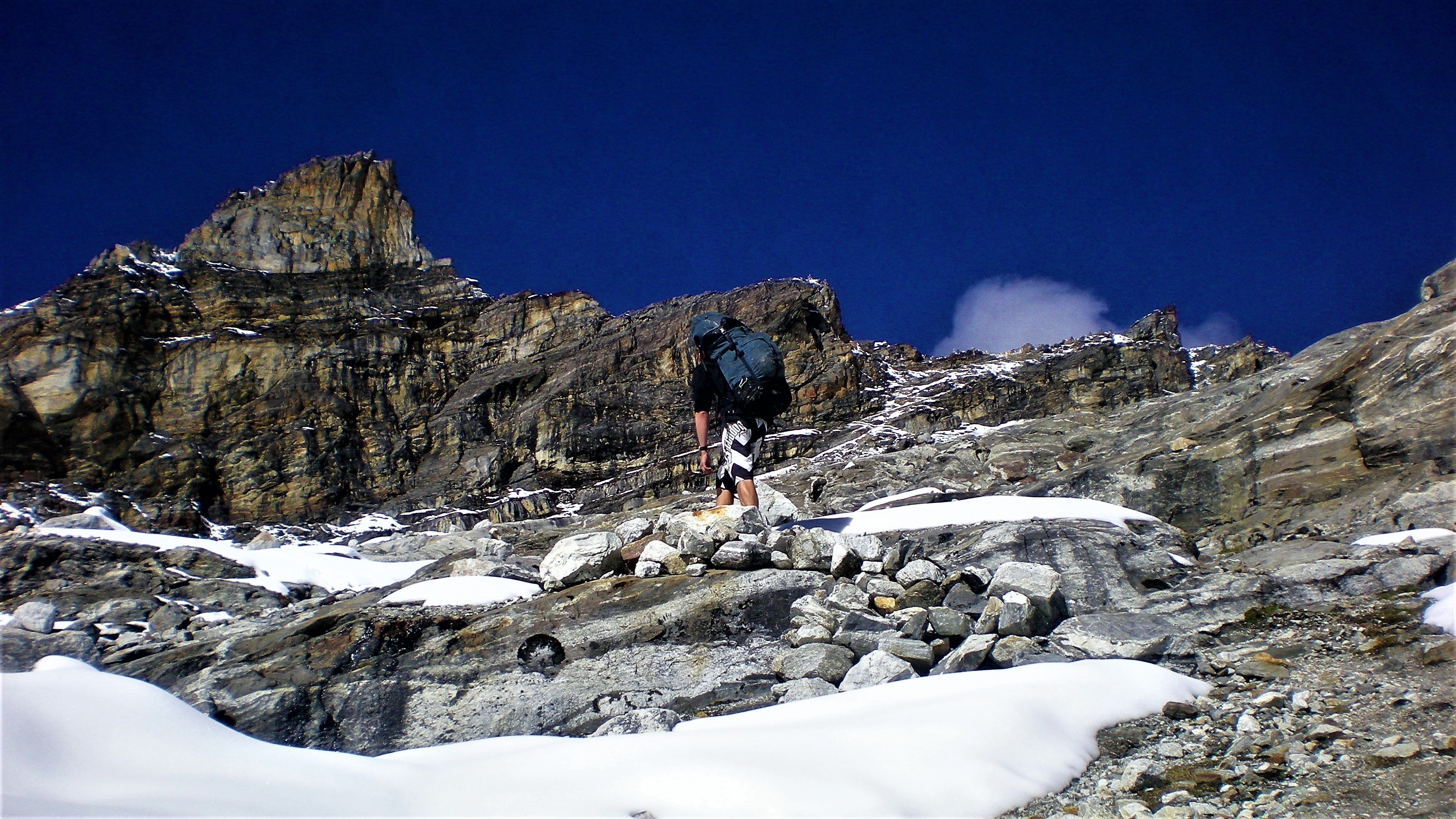 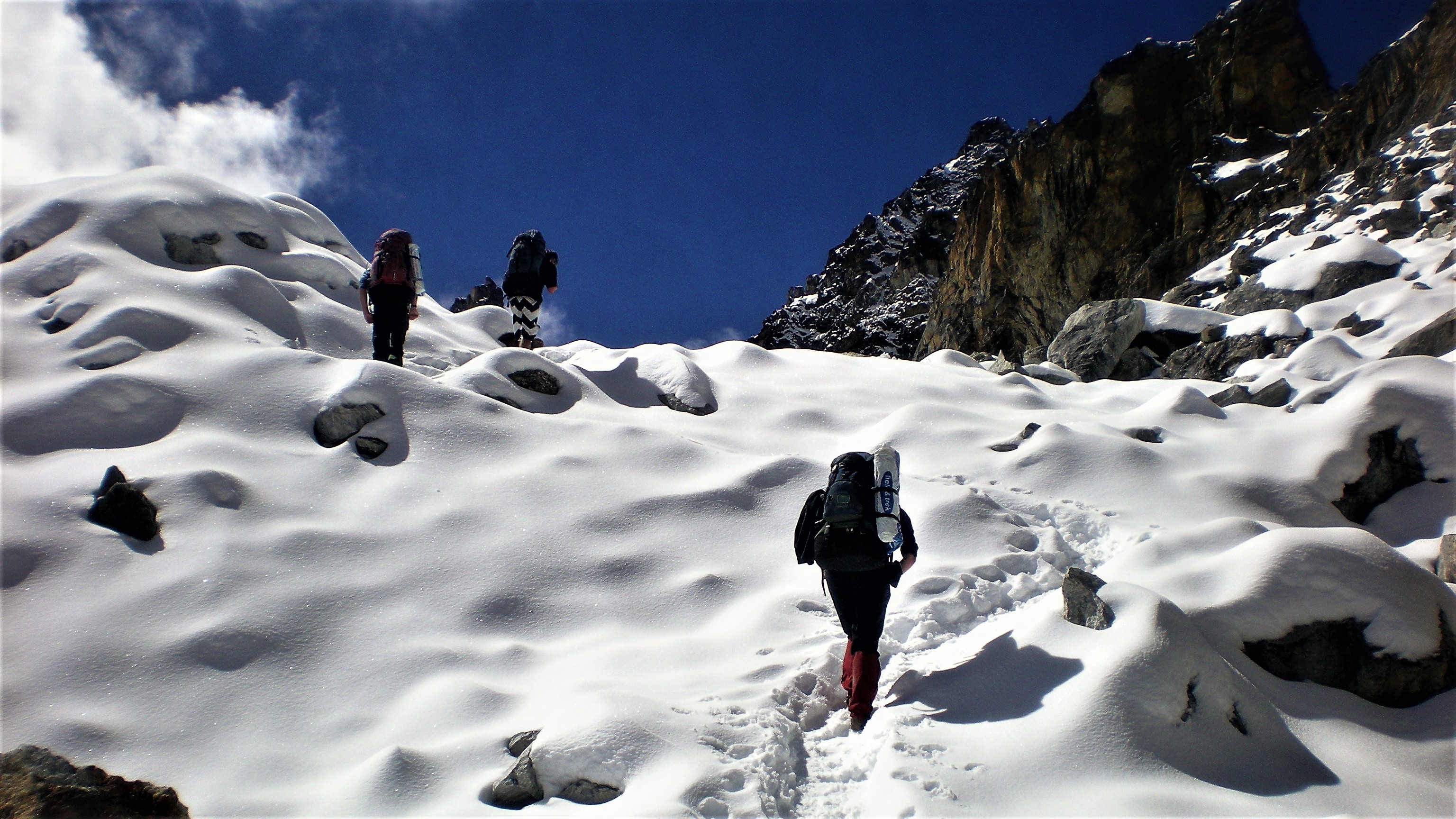 We finally reached the pass and took a welcomed break to eat some biscuits and take the last look at the mighty couple – Everest and Lhotse. Then we took a steep path, but this time leading us down into the valley, with snow reaching up to our knees at first, later following loose rocky surface until we reached a lake and later a village called Langden (4,090 m) where we could have lunch. That day our steps led a bit further down the valley to a village called Thame (3,800 m). We were only about 3 hours away from Namche Bazaar, our destination for that day so we had no reason to hurry. We slept long and took a long sweet breakfast. No offence to veg. curry but after being some time away from the outside world, you eventually start craving food like chocolate or pancakes or even better in that combination. Luckily these mountain restaurant are equipped for this sweet desire.

We walked slowly down the valley, each step the ground was more and more alive with flora. Gone were the harsh snowy and rocky plateaus, the meadows here were alive and blooming and provided a good pasture for grazing yaks, goats and ponies. 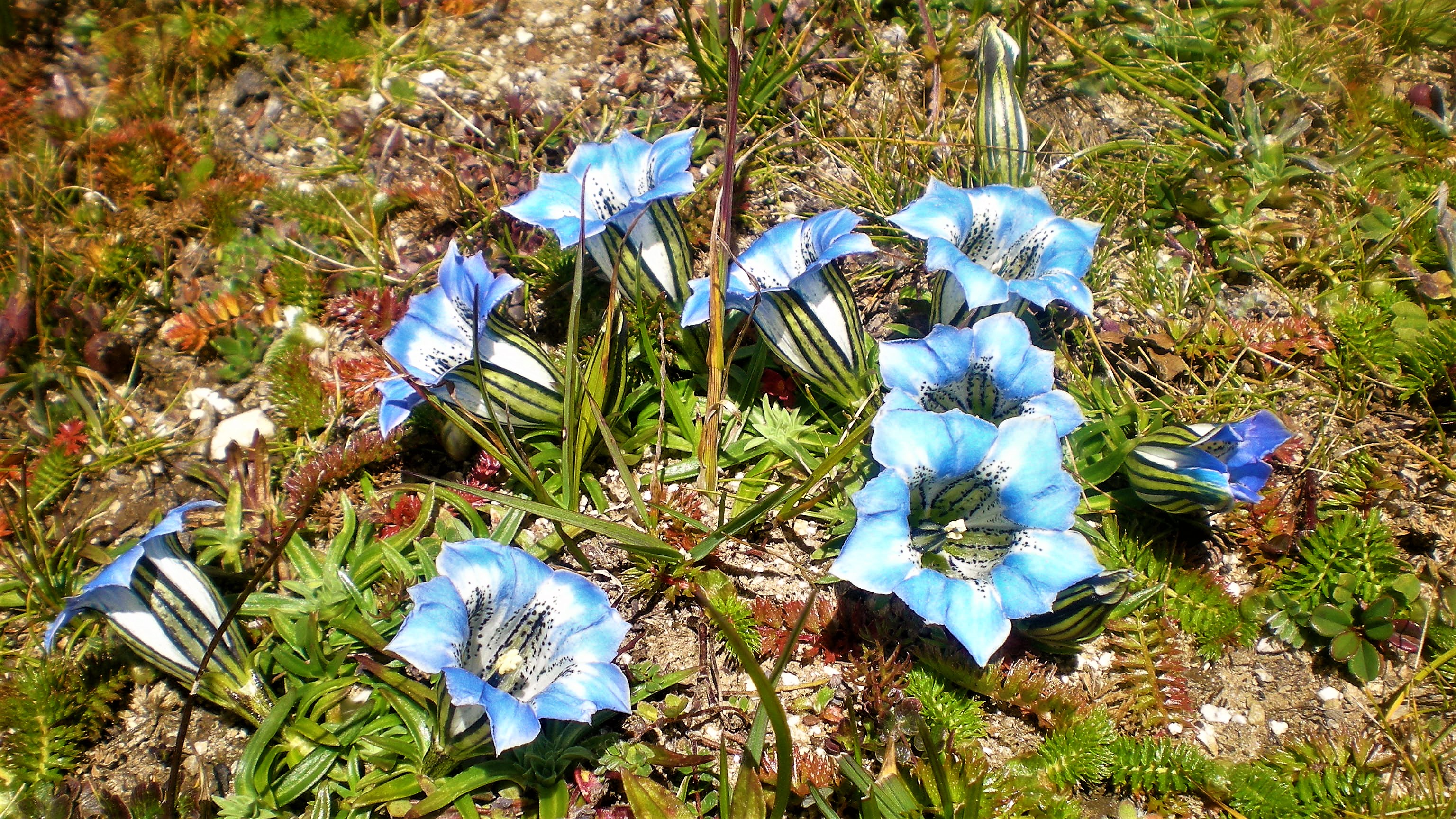 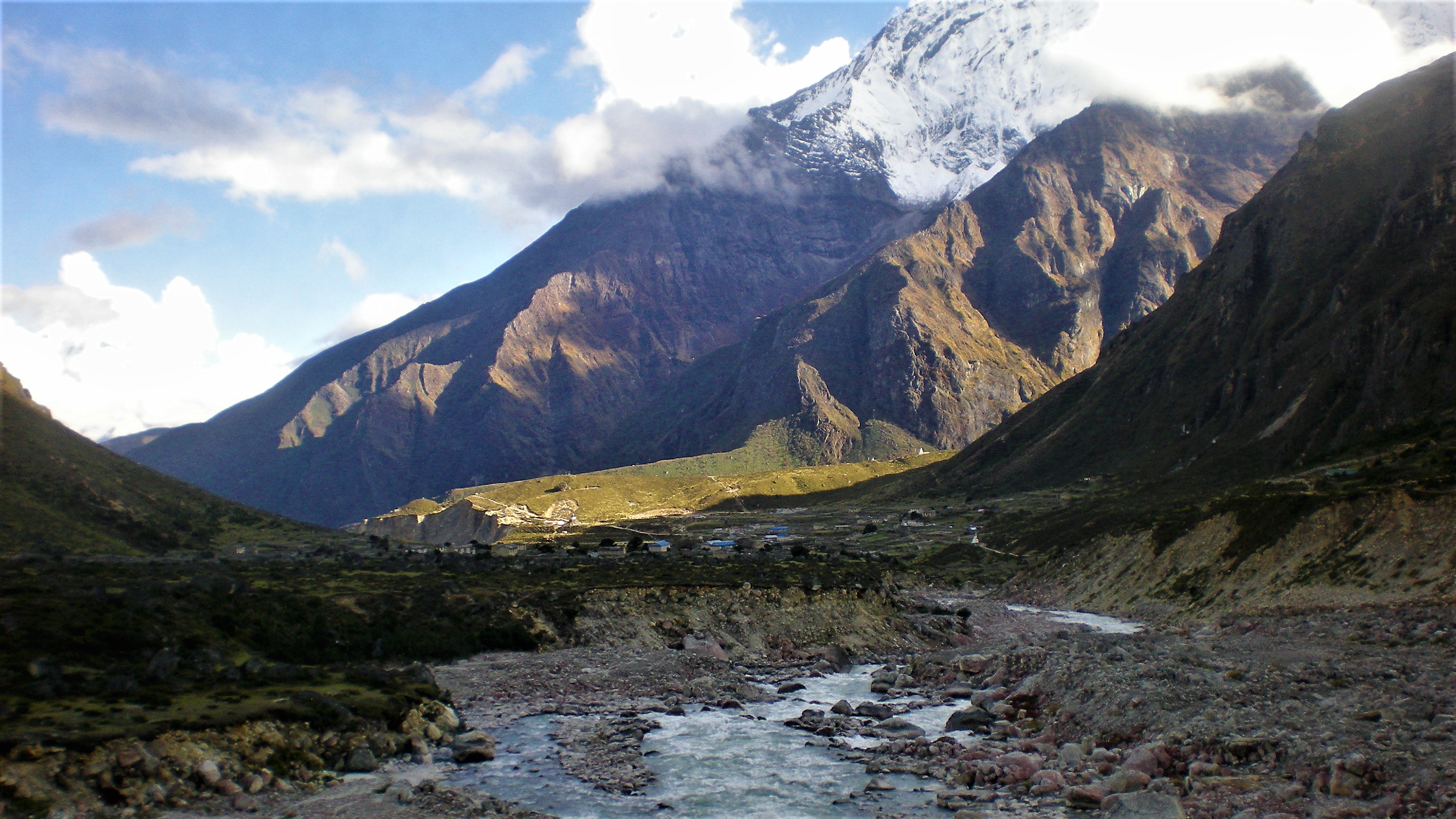 Namche Bazaar welcomed us soon enough with open arms, sweet shop a pizza place and souvenir market place, that’s pretty much how we spent that afternoon.

The rain from the previous night cleared the air but the new day was promising clear skies as I was hiking up to a nearby hill and Japanese hotel to welcome a new day. The rising sun turned all surrounding mountains orange, leaving me breathless. The hotel looked luxurious and offered views ob Mount Everest and Ama Dablam. They even had their own runway! 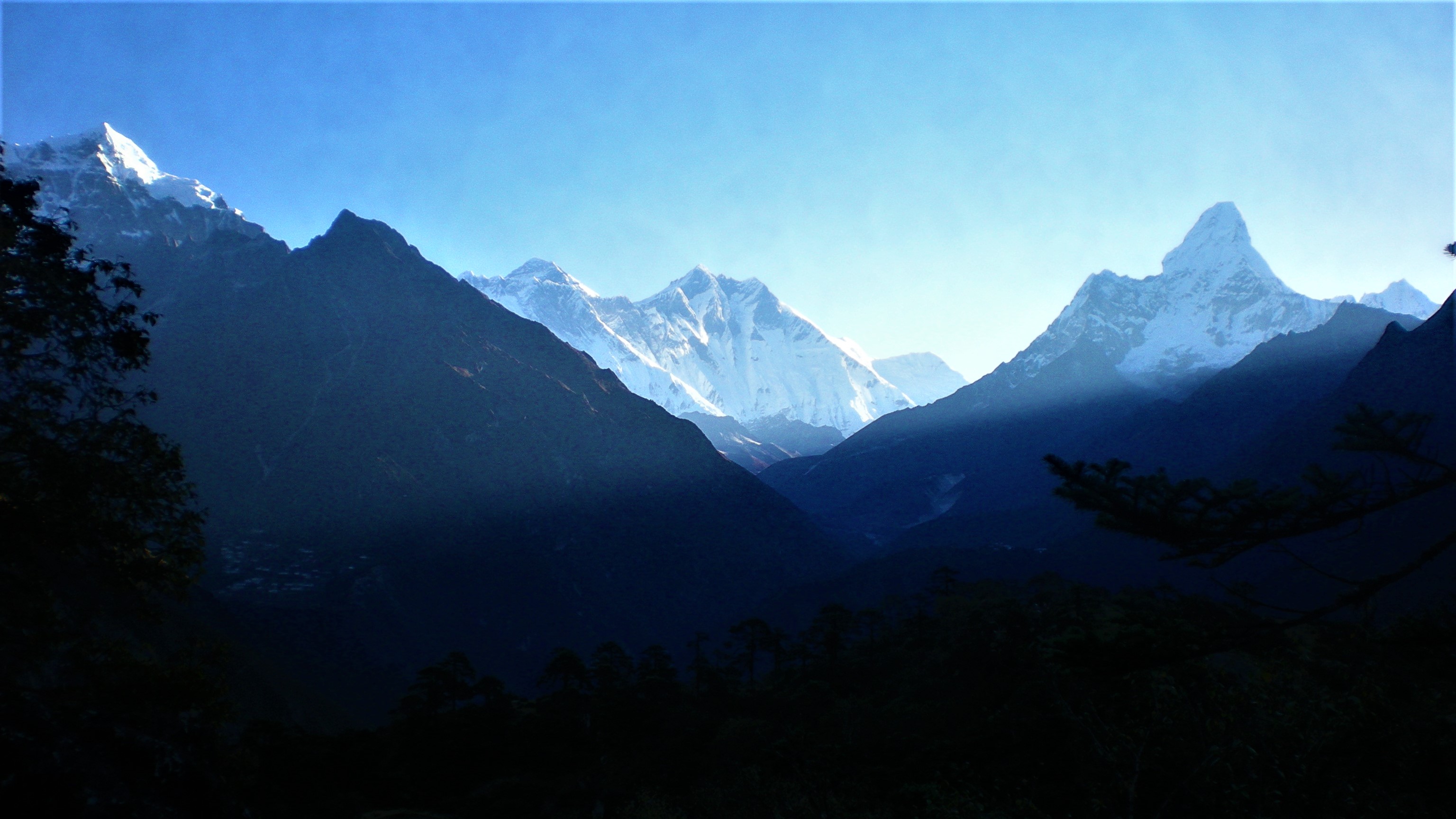 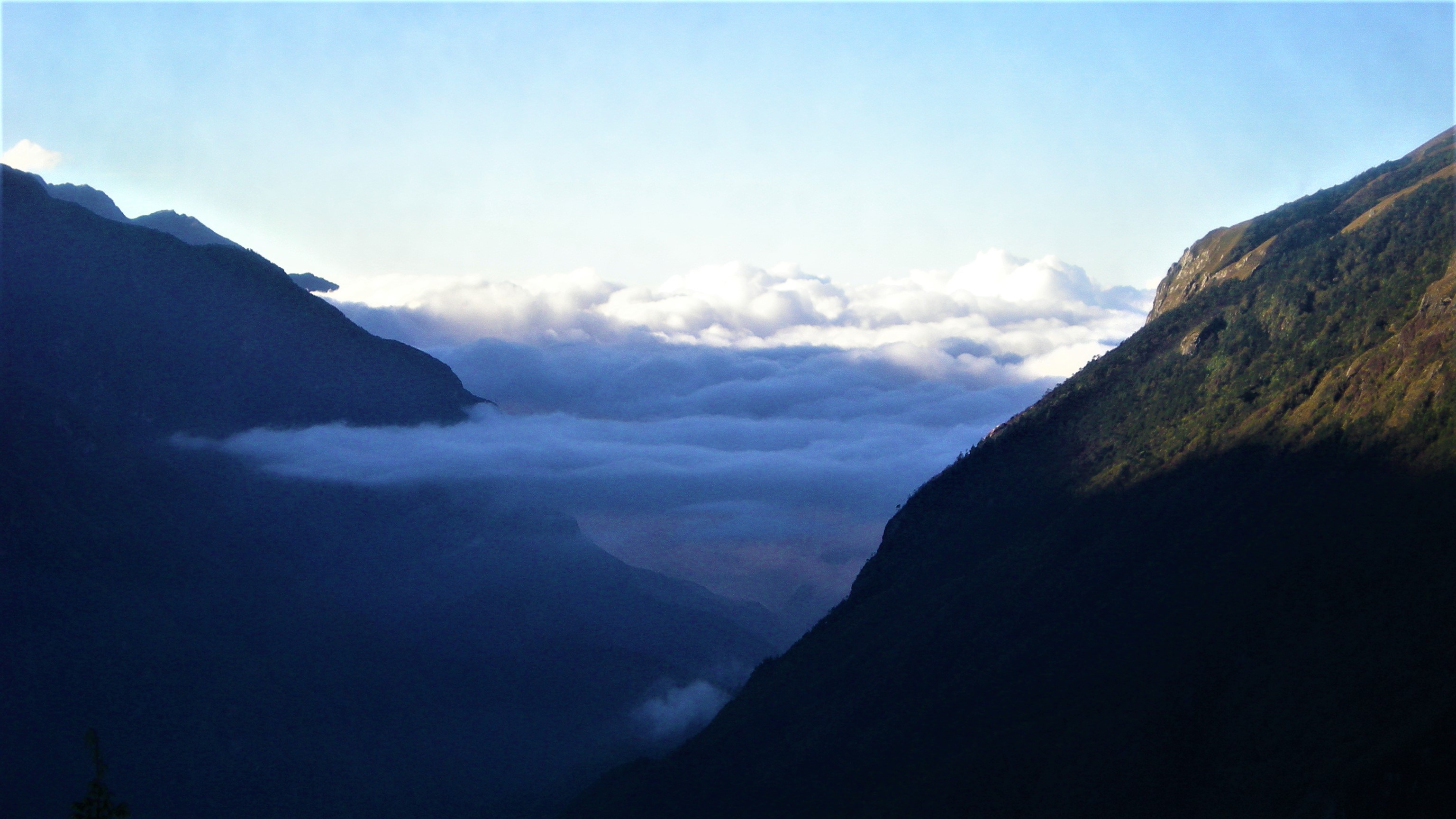 Coming back to Namche Bazaar I said goodbye to my Aussie friends and started walking down the valley, back to Lukla, living many more adventures on the way …