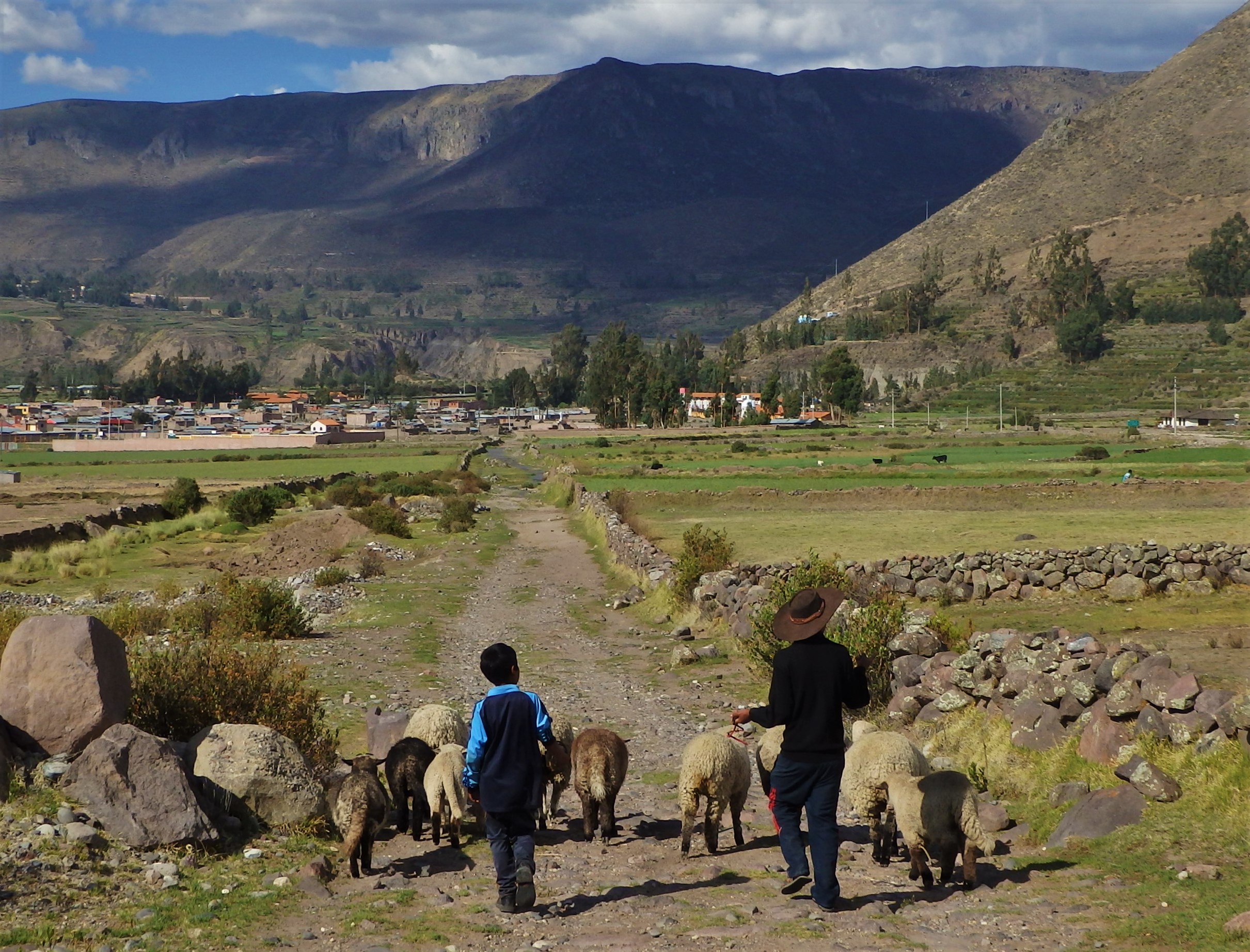 The Colca Canyon in southern Peru is one of the deepest in the world, reaching a depth of 4,160 meters. It is home to condors, llamas, alpacas, wild vicuñas and pumas. This dry, volcanic landscape offers dramatic views of giant mountains, reaching up to 6,000 meters.

First two cultures known to have inhabited Colca Valley about a thousand years ago were the Cabanas (Quechua culture) and the Collaguas from the Puno region. It was them who constructed agricultural terraces in the valley and created irrigation systems to supply their crops with water, running down from the surrounding moutnains.

The name of the canyon comes from the word “qolqa” (colca). Colcas are mud and stone caves, found on cliffs of the canyon, to keep crops or seeds refrigerated. They can be found throughout the valley and also here in Yangue, at the Puente Sifon bridge.

In the late 14th century the Incas arrived in Colca Valley and the influence of their stonework knowledge is visible in the construction of irrigation channels and terraces. The 16th century belongs to Spanish conquistadors, they created towns throughout the valley and the original small settlements (for example Uyo Uyo) became abandoned. They also built churches in each of these towns.

The interesting fact is that Colca Canyon became first known thanks to Polish kayakers & adventurers who made the first descent into the canyon in 1981 and published a guide book called “In Kayak Through Peru”.

Volcanoes van be found all around in 360° view. The tallest ones to be seen here are: Hualca Hualca (6,025m), Sabancaya (5,976m) and Ampato (6,288m). Ampato volcano is known for one of the most sensation discovery of a mummified Inca body called “Juanita”.

Juania was a mummy of a girl, found frozen and well preserved at the top of Ampato volcano. She was covered in the brightly colored burial tapestry, with a collection of offerings: bowls, pins, and figurines made of gold, silver, and shells. Her head was decorated with a cap made from the feathers of a red macaw. She was dressed in a colorful woolen alpaca shawl and a silver clasp, wearing the finest textiles from Cusco, the Inca capital city.

Her sacrifice was part of a ceremony called “Qhapaq hucha” or Capaccocha through which boys and girls were offered to the mountain gods (the Creator, the Sun God, the Moon God, and the Thunder God). These children were chosen for their perfection. They had a transcendental mission during the Capaccocha: the “Calling to the Great Waters”, as deliverers of messages from the Sapa Inca, the Inca Emperor.

The children were raised in a special house called “house of the chosen ones” and were treated in a very special way. They knew what their mission was in every aspect. The male victims were no older than ten and girls could be up to age sixteen but must be a virgin when chosen; they had to be perfect, unblemished by even a freckle or scar. The children were paired off, girl and boy, and dressed finely like little royals.

The sacrifice (the “calling”) was performed every four to seven years on request of Sapa Inca. The chosen children were brought to the main square of Cusco, together with other offerings as presents from Sapa Inca to the children. One hundred white llamas were to be sacrificed during the ceremony at the main square. The sacrifice was primarily carried out through four methods: strangulation, a blow to the head, suffocation, or being buried alive while unconscious.

Seemingly quiet small town hidden in Colca Valley, still offers a few entertainments, shall it be zip-lining, horseback riding, hiking or soaking in natural hot thermal bath … or enjoying a glass of pisco sour, yeah! 🙂 The main square is where most of the locals gather, on fiestas, you can meet people dressed in their traditional costumes, playing music and dancing and drinking enormous cups of “chicha” (fermented drink made from maize).

There are four thermal baths in the valley, right next to Colca river. The hottest ones are those located at the very bottom, right next to the river (so you can cool down int he river if you like). 😉 The top hikes (or horse back rides) are to explore Uyo Uyo ancient village, or an old graveyard, built in the top of the rocks, or to see a mill, still preserved from the colonial times.

To access the tourist circuit attractions in Colca Canyon, visitors are required to purchase the Boleto Turístico (Tourist Ticket). The price is 70 soles for tourists, 40 soles for Latinos and 20 soles for Peruvians. The collected money is used for tourism promotion and infrastructure.