Less than 1,000 vertical meters left to climb, we set off with eagerness to finally arrive to our destination. It was a mild climb that led us first to Machhapuchchhre base camp in 3,700 meters above sea level and from there, it was a pleasant walk through mountain meadow with blooming flowers of various colors all around. However, it was also the time when we started feeling the effects of the altitude and that made us slow down a lot. It was step after step and despite a mild climb we were short of breath. At times I wished just to lie down and sleep. We walked through a cloud and could hardly see what was in front of us. But then, there it was, the sign! We were in Annapurna Base Camp – ABC, in 4,130 meters above sea level. 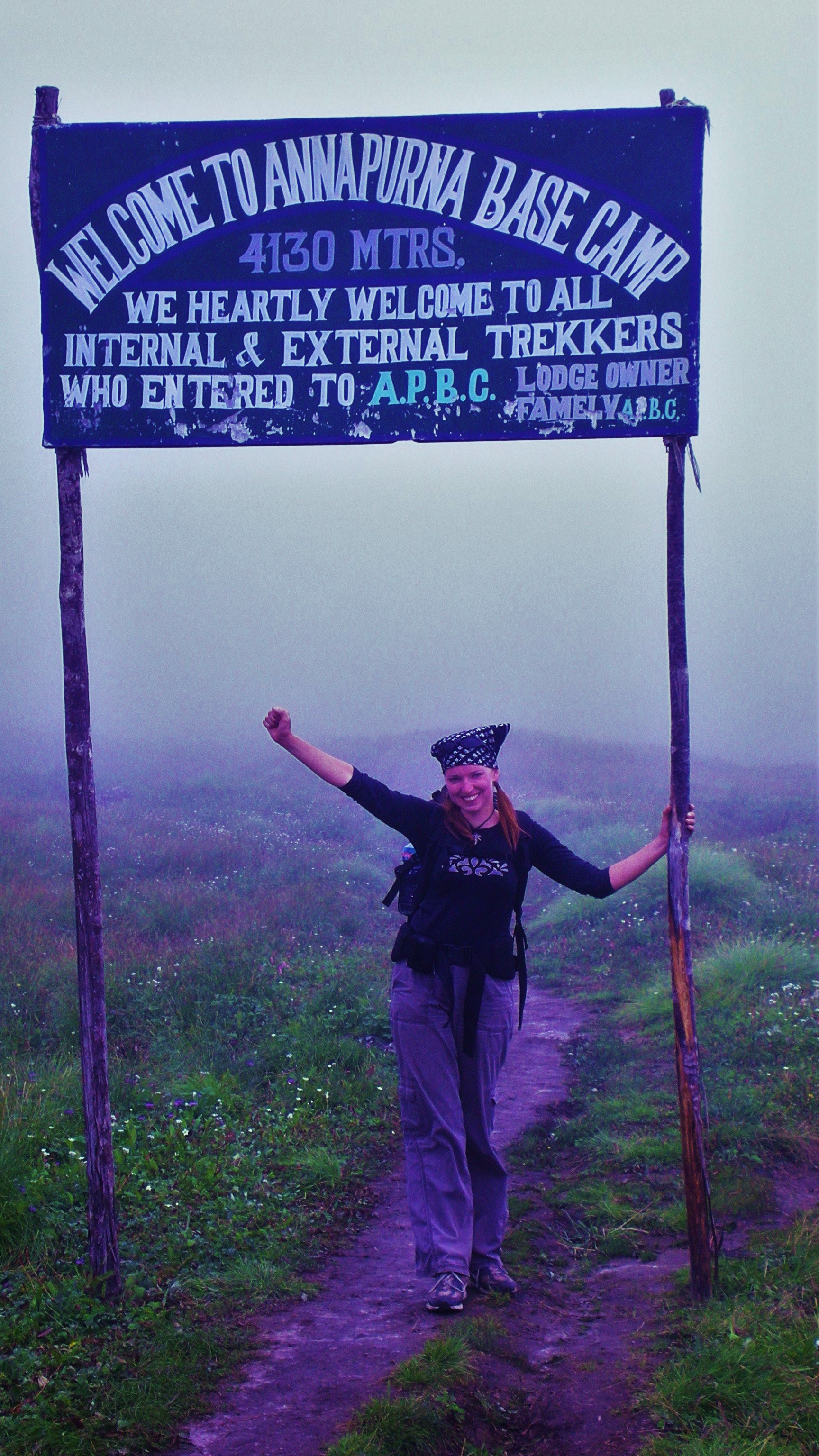 We made it! So happy that we just wanted to sit and rest. My friend Eva was sick and experiencing these symptoms for the first time, we both were worried. If the symptoms worsened, we would have to descend. However, she managed to join us for a short exploration hike in the surrounding neighborhood which was basically a valley covered by glaciers and avalanche rocks. At times, some of the clouds uncovered peaks of six- and seven- thousanders that held guard above us. Annapurna remained hidden through the entire afternoon. Later at the lodge, I took the coldest bucket shower in my life – from the water coming right out of a glacier.

Because it’s never warm in four thousand above sea level, we decided to sleep in the dining room, as close to the fireplace as possible. Our beds were wide benches and we had several blankets to cover ourselves. When I peeked out from under those layers early next morning, I was rewarded a view of blue sky and sun, making its way over the tops of the Himalayan peaks, giving them that gorgeous orange-pink color. I jumped out to get the full view of it all from outside and a nomad dog, that just happened to be around, joined me. Finally I could get a perfect view of Annapurna, its white peaks in contrast with blue skies.

Me, Eva and the nomad dog started heading back through the blossoming meadows and seething creeks, on a sunny day like that we could finally enjoy the whole beauty of it. The two boys from Netherlands with their guide passed us but we were in to rush to catch up with them, we were enjoying those breathtaking views. Until …

Until Eva smelled that characteristic smell of a tiger. And soon after that we found its footprint in the mud. That was the trigger for us to start running down, to catch up with the boys. It took us a couple of hours and millions of worst-case scenario thoughts about being eaten by a tiger until we finally found them – what a relieve! We could finally stop to have lunch and after that I got tempted to try what it’s like to be a sherpa. There were two baskets, loaded with things. I chose the smaller one, put the straps around my arms and around my forehead, but then – I could not even stand up – that heavy it was! Amused sherpas helped me stand up with the basket on my back and it still felt pretty heavy – wow, respect guys! We all ended that day in a village called Sinuwa, in 2,360 meters, the nomad dog was still with us.

Also day 6 we started our hike together but in a village called Chomrong our paths split, the boys were heading back the same way while we wanted to try a different way back. The nomad dog was our company as we climbed up a hill and a village Jhinu Danda, 1,780 meters. I was headed to soak myself in local hot pools, while Eva, aware of the presence of the leeches again, decided rather to stay in the safety of the village and have breakfast. I payed for it with my blood but soaking in two little hot pools right next to a river was a blast. There were a few little monkeys, peaking their heads out of the tree branches both curious and shy.

As we continued on, the trail led further to New Bridge, although we struggled to find it for a while. And as we were lost, we lost our dog as well. On the other hand, it was for the better, he belongs here. It rained on us and we struggled to walk to the next village called Tolka but when we got there, we decided to challenge ourselves and continue to the next village – Deurali in 2,149 meters. We arrived completely wet but received a warm welcome from our host who lend us flip-flops as our shoes were soaked with rain and blood (from the leeches).

We had a short hike ahead for the last day. After a week of hiking, we could not wait to enjoy some rest and comforts of the civilization, such as a shower. The trail led us through the foothills of Himalayas and they too were very pretty to look at, full of abundant vegetation.

Finally arriving to a village called Phedi we both bought a bottle of CocaCola, which we normally don’t drink but I guess we needed some caffeine and sugar, all in one. Or perhaps we got influenced by the intense advertisement of this beverage throughout Nepal, each child with holes in their clothes and dirt on their cheeks held their own bottle of CocaCola. 🙂

And later, back in the hotel we started from, after a good shower, while sipping a delicious lassi, we were checking our scars and bites left by the leeches.

To take with: warm and comfortable clothes, good hiking shoes; water purification drops or pills; sleeping bag, neither food is needed, the accommodation in the mountain villages offers all; during monsoon season take rain coat and for the leeches salt, tobacco, lighter or a knife.

How to get there: bus from Pokhara to Naya Pul and back from Phedi to Pokhara.