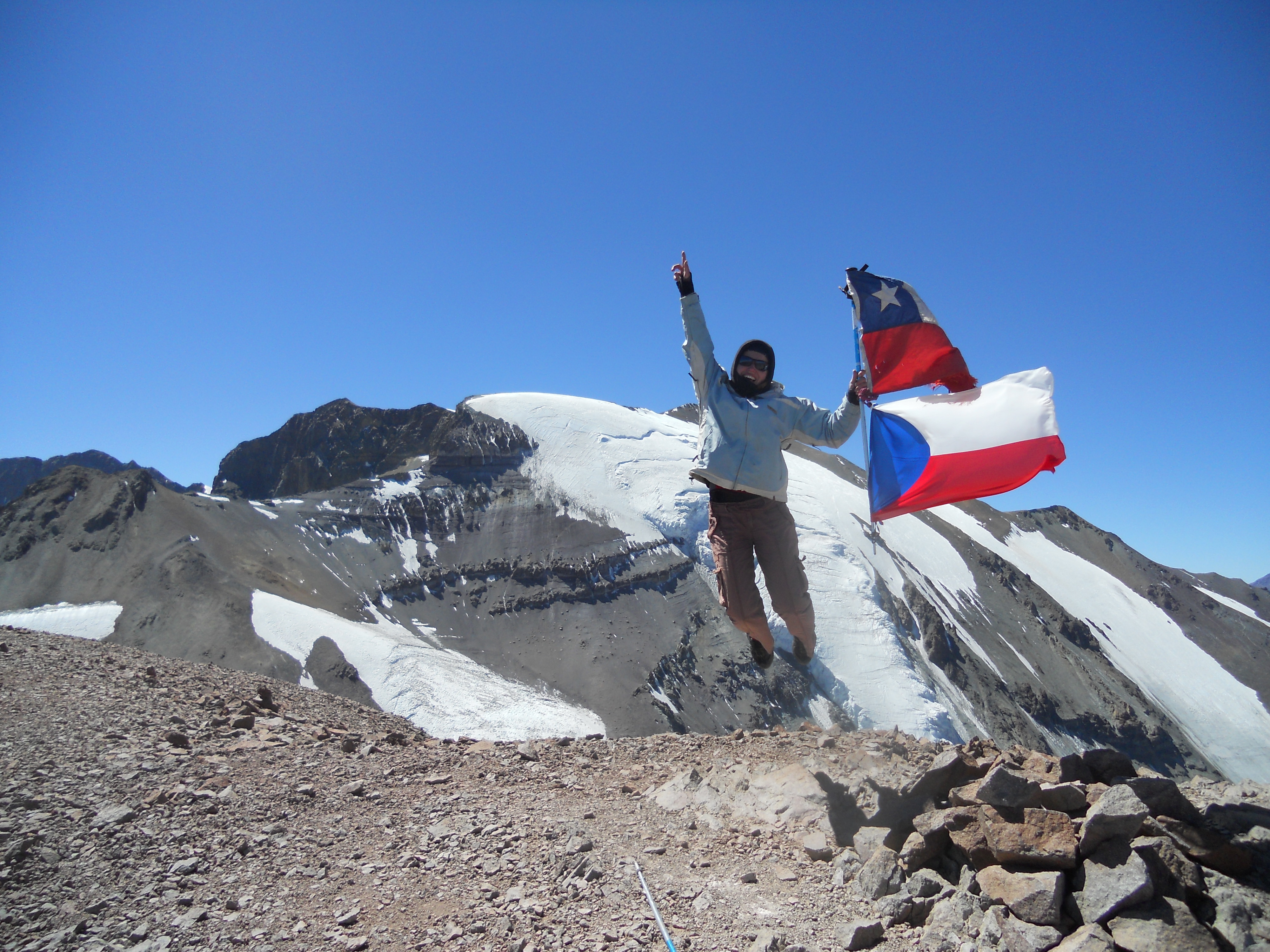 Santiago, the capital of Chile, founded in the 16th century by Pedro de Valdivia is home to 7 millions of inhabitants. The first thing that attracted my attention when walking the streets of Santiago, was breathtaking view of the Andes mountain range, hugging the city from north-east to south-east. These giant mountains reach up to 6,000 meters above sea level.

If you’re an adventurous soul like me, you’ll be tempted to hike those mountains and conquer one or two. Or at least you’ll want to explore what’s hiding in these mysterious deep valleys or find out which one of those glaciers provides drinking water for Santiago.

As a part of my volunteering experience at – now fully established – company called Eco Routes, I joined the owner Fernando on an introduction hike to Mount Leonera (4,956). The company is based in Farellones, about 35 km, going up into the mountains from Santiago, just below La Parva ski resort.

Our climb started above the La Parva ski resort. After short, yet challenging climb, we reached the first peak, La Falsa Parva (3,888m). I put a stone on the top for good luck, like they do in Nepal. From there, we followed the path on the top of the mountain range, dividing two valleys, Molina and Yerba Loca. 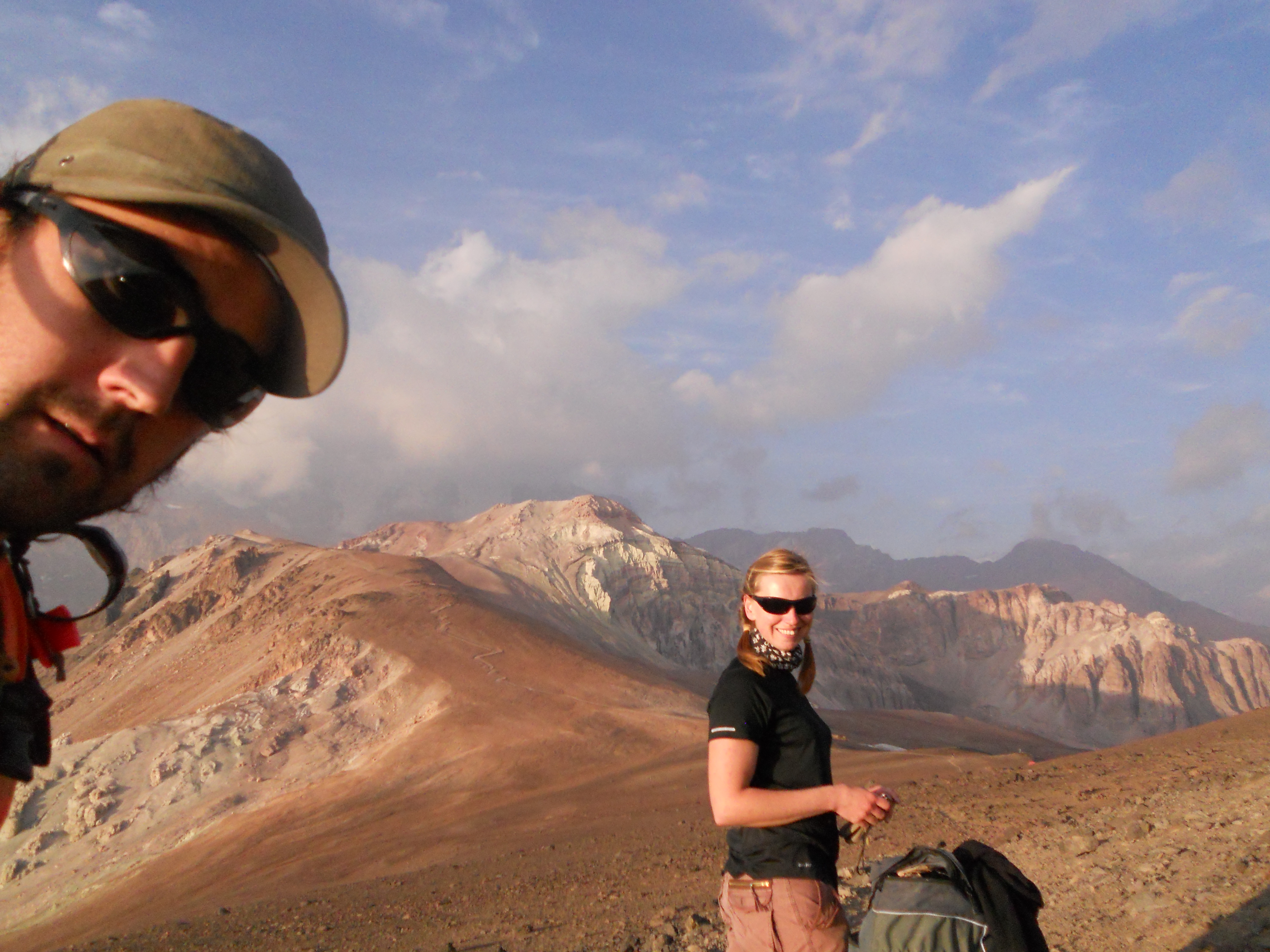 We passed La Parva mountain and after some time of walking on a moon-like land we were offered a view of a beautiful four-thousander El Pintor (4,180m). These rocks are rich with various metals that give the mountain a look of a painter’s palette, changing its colors from orange to green.

The sun was about to set down and we decided to go for the top. Sunsets in the mountains above Santiago de Chile are incredibly colorful, perhaps thanks to the ever-present city smog. We were there just in time for a beautiful sunset view over Santiago, changing its colors from orange to pink and even purple. 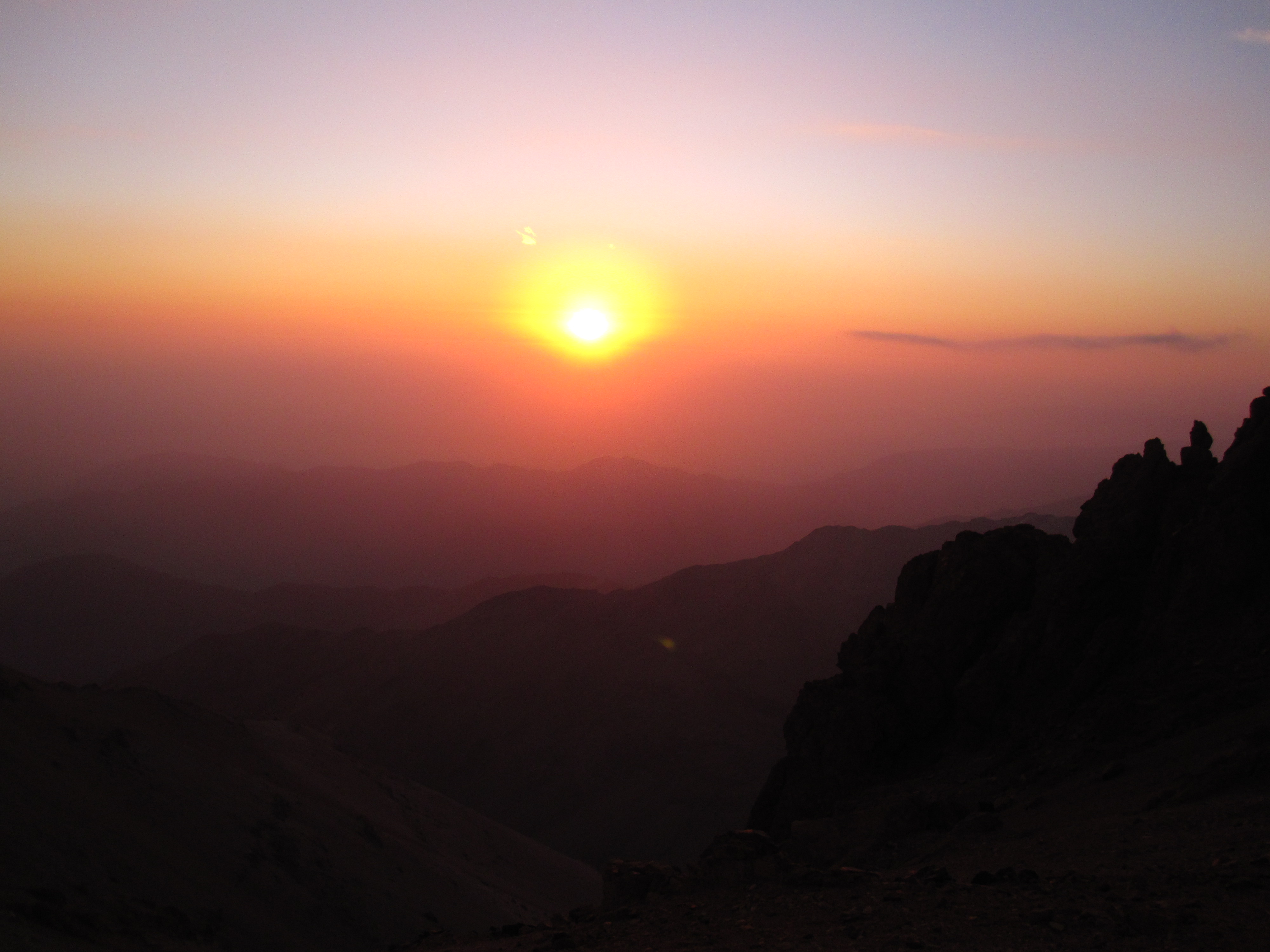 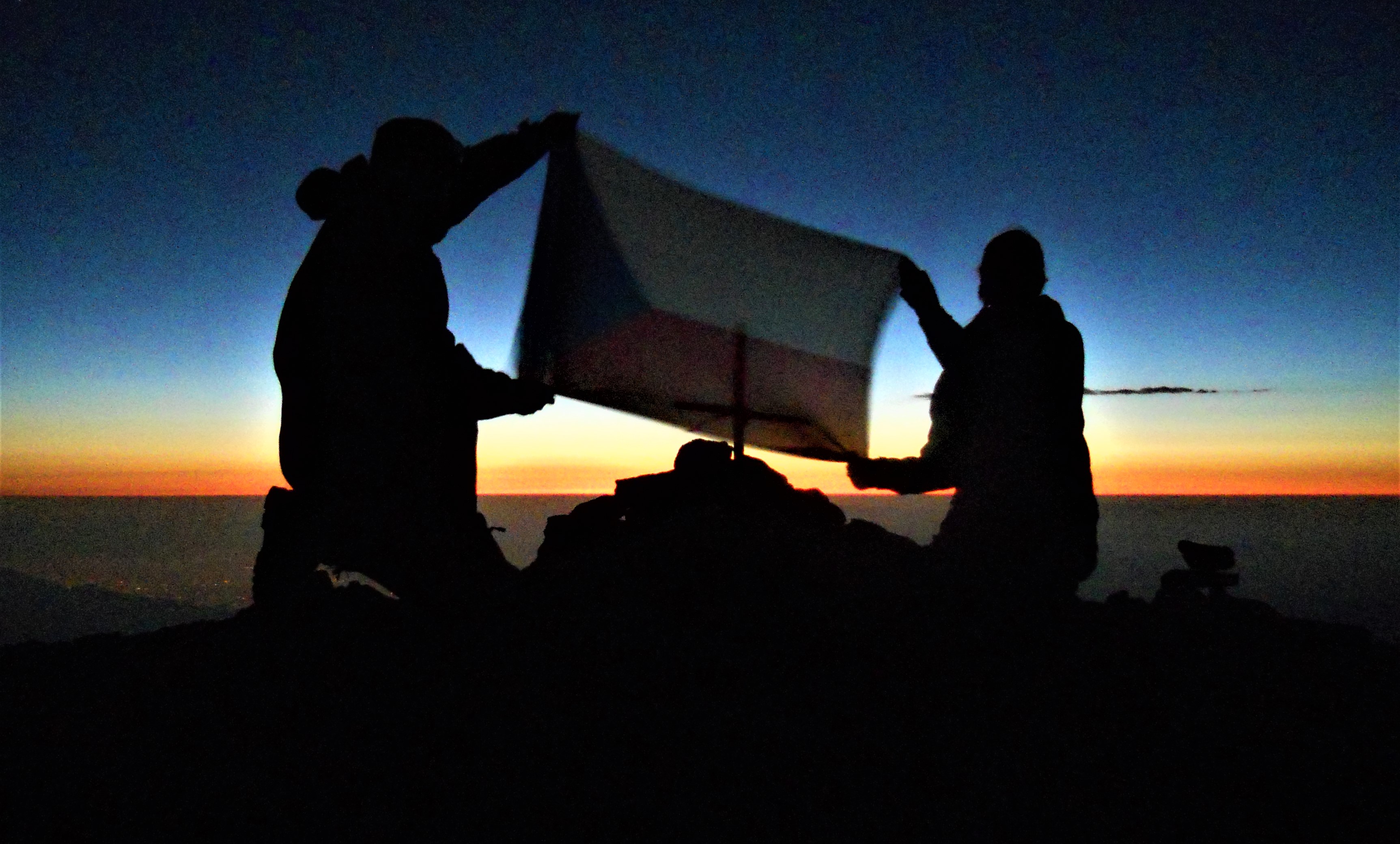 As soon as the last rays of sun disappeared, the city lights went on and for us it was time to look for a good place to camp. We picked a spot at the foot of the mountain top, right at the edge of the mountain range. Luckily this land offers so-called “pircas”, wind protection made with stones, once used by Incas. But believe me, though we were falling asleep with a view of peacefully blinking stars on a dark sky, next morning brought some strong wind, urging us to get up before sunrise. So we were pulled out into the freezing cold, going for the summit run to Leonera and I was fighting my first stronger symptoms of altitude sickness.

Before the sun rose, we were already on our way to walk the remaining 1,000 vertical meters to the top of Leonera. Frozen and dizzy, with aching heads we suffered our way on the top of the mountain range until the sun rolled over the mountain tops on the east and its nourishing rays finally made our walk a little more pleasant.

The valley below with Santiago city was all covered into the clouds, only the tops of the city hills pointing out like islands in the middle of the ocean.

The last steps of the climb seemed never ending. Troubled by the symptoms of the altitude sickness, we sipped „yerba maté“, a favorite local drink that contains caffeine and other beneficial minerals. Every time we thought there must be the top after the next peak, the tricky trail curled further up, over new boulders and little paths.

We stood at the summit after all, finally there was nowhere higher to go. A group of stones showed us the very top of Leonera. We raised our flags, one Chilean and one Czech. We stood on one of the tops of the Andes, enjoying the beautiful views of the mountain giants and valleys, even Aconcagua (6,962 m), the highest mountain of South America.

Majestic El Plomo (5,424 m) stood right next to us, with its two glaciers – „Colgante“ a „Iver“ – shining white on the bright sun. These two glaciers are drinking water source for Santiago city. El Plomo has an interesting history that goes around 500 years back, to the times of Incas.

In 1954 some climbers found near its top a mummy of a young boy in the age of 8 – 9 years, who was sacrificed to gods. His very well preserved body is now on display in the Chilean National Museum of Natural History in Santiago. The place where the mummy was found is called „Pirca del Inca“. There is a rumor going on between the climbers who aim to climb this mountain, those who don’t bow to this sacred place, will never reach the top of El Plomo.

With our heads still aching, we finally started coming down. We decided to take a different route, into Molina valley, which was longer but prettier. Good news was that there was water (as we had almost none left) and it would bring us to lower altitudes, which meant end of headache.

We didn’t really find a proper trail but after all afternoon following a glacier covered with dirt, slipping and falling frequently, we were happy to find the first creek, seeing the mighty mountains above with glaciers and ice falls on the tops, waterfalls in lover parts.

Almost 2,000 meters lower, the relief finally came and we suddenly started feeling tired and hungry. One look back offered and amazing view of El Plomo, standing next to Leonera, all lit by a setting sun and brought joy. That evening we camped on green pastures, with horses grazing around us and with the sound of a chirping creek. In the end we skipped dinner as well and just passed out completely exhausted instead. 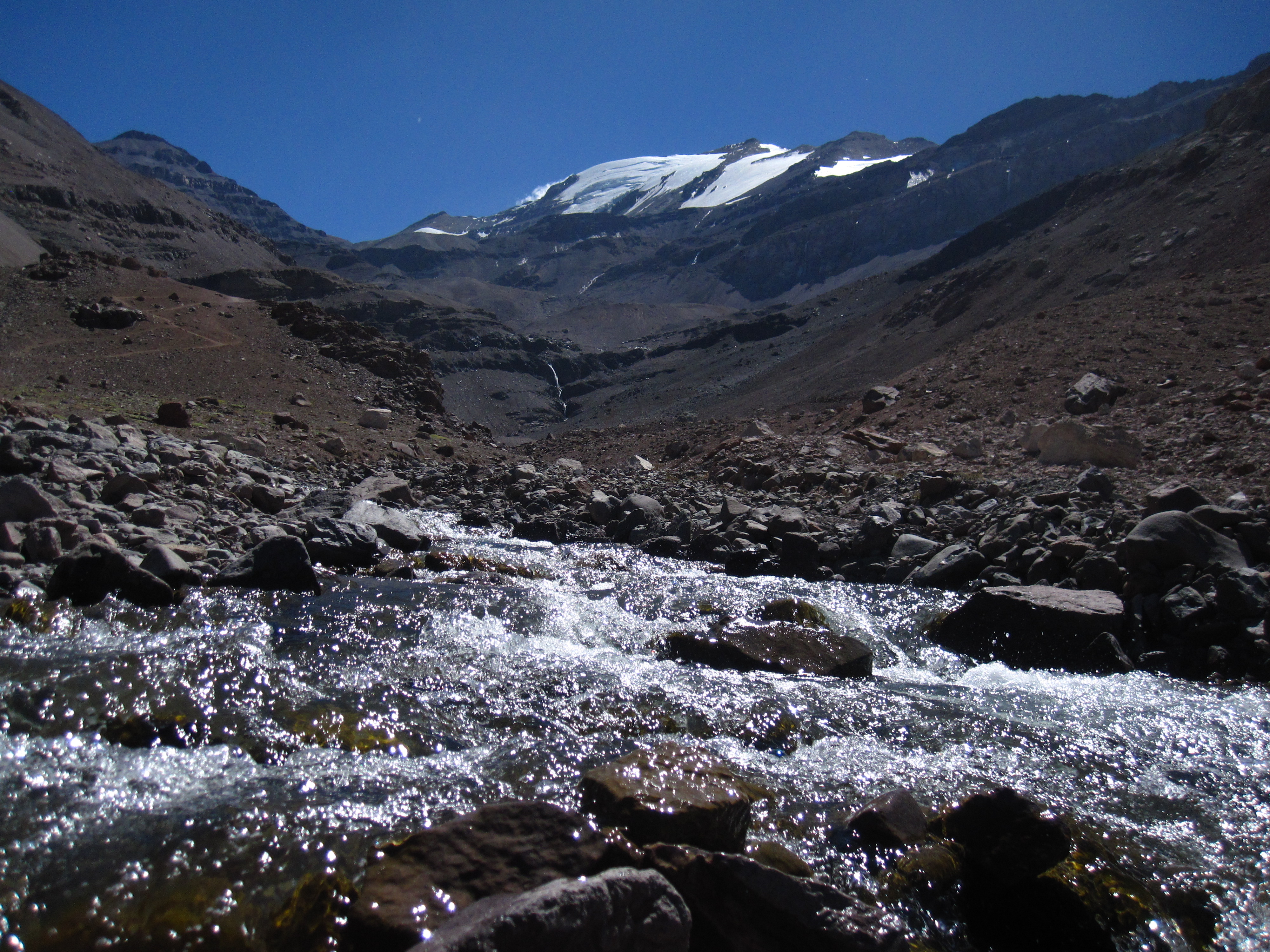 But the sleep did an incredible recovery, the headache was gone and I could finally appreciate the beautiful views I had there. After a big breakfast we headed out, back to the civilization, passing the peaks we climbed earlier, standing right above us.