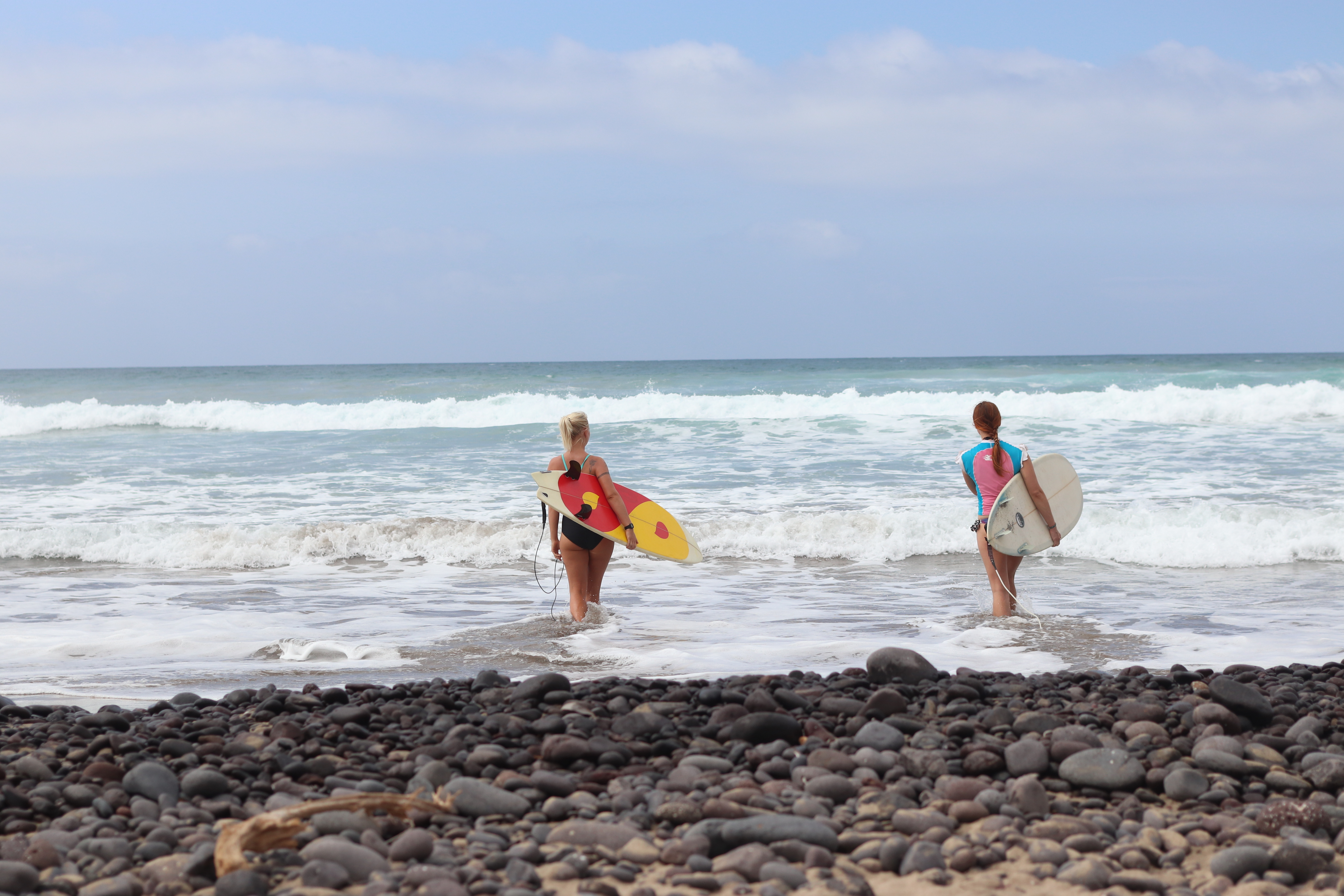 Often times I find, life is like the sea. At times it is like a calm bay, you get to breath, enjoy simple things, appreciate watching the sun rise and move over the horizon until it sets down. But there are also days with big swell and you have to surf those waves, otherwise they’ll roll you over and leave you just enough time to inhale before the next wave hits you.

So here I am, surfing this wave, focused on the ride, having no time to look one way or the other. Adrenaline rush pumping through my blood, I almost forget to breathe. It’s a fun wave but it’s taking me along without asking me if I want that. Can you relate? 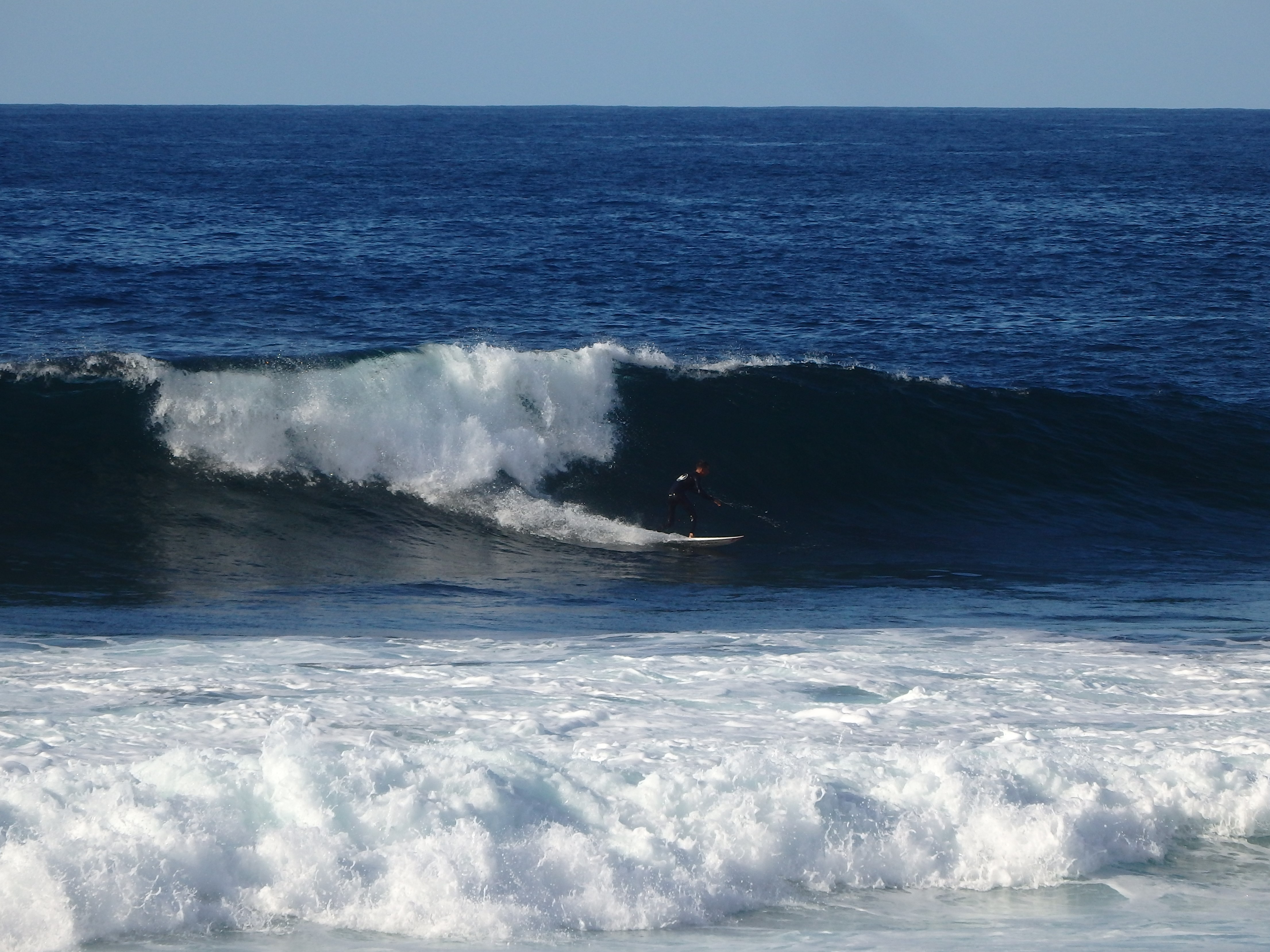 I think everyone feels like riding that wave every now and then. I’ve been riding it since I came to Lanzarote last September I guess. And it’s good because I came here to surf anyway. 🙂

I heard many legends about Lanzarote. People say it’s a powerful place that attracts you, completely embraces you and gives you lessons you won’t forget. When the time comes, Lanzarote may call you, like it called me. I landed on the island only a week after buying a flight ticket, unaware what would await me. I had a good company though …

I was inspired to come to Lanazrote by two friends of mine, and decided to buy a flight ticket one week before landing on this giant volcanic rock. I met many interesting and inspiring people here, many of them were surprisingly Czech.

Lanzarote has so many amazing spots! My favorite of course is Famara. It’s a small surf town that has everything you need. A  long beach good for both  surfing and swimming. You wouldn’t wanna go for a swim though when the ocean turns wild! Famara has a few nice cafes and restaurants with fresh sea food. Here you can fins quiet beached for a bonfire evening or hike along the cliffs on the far end of the beach. 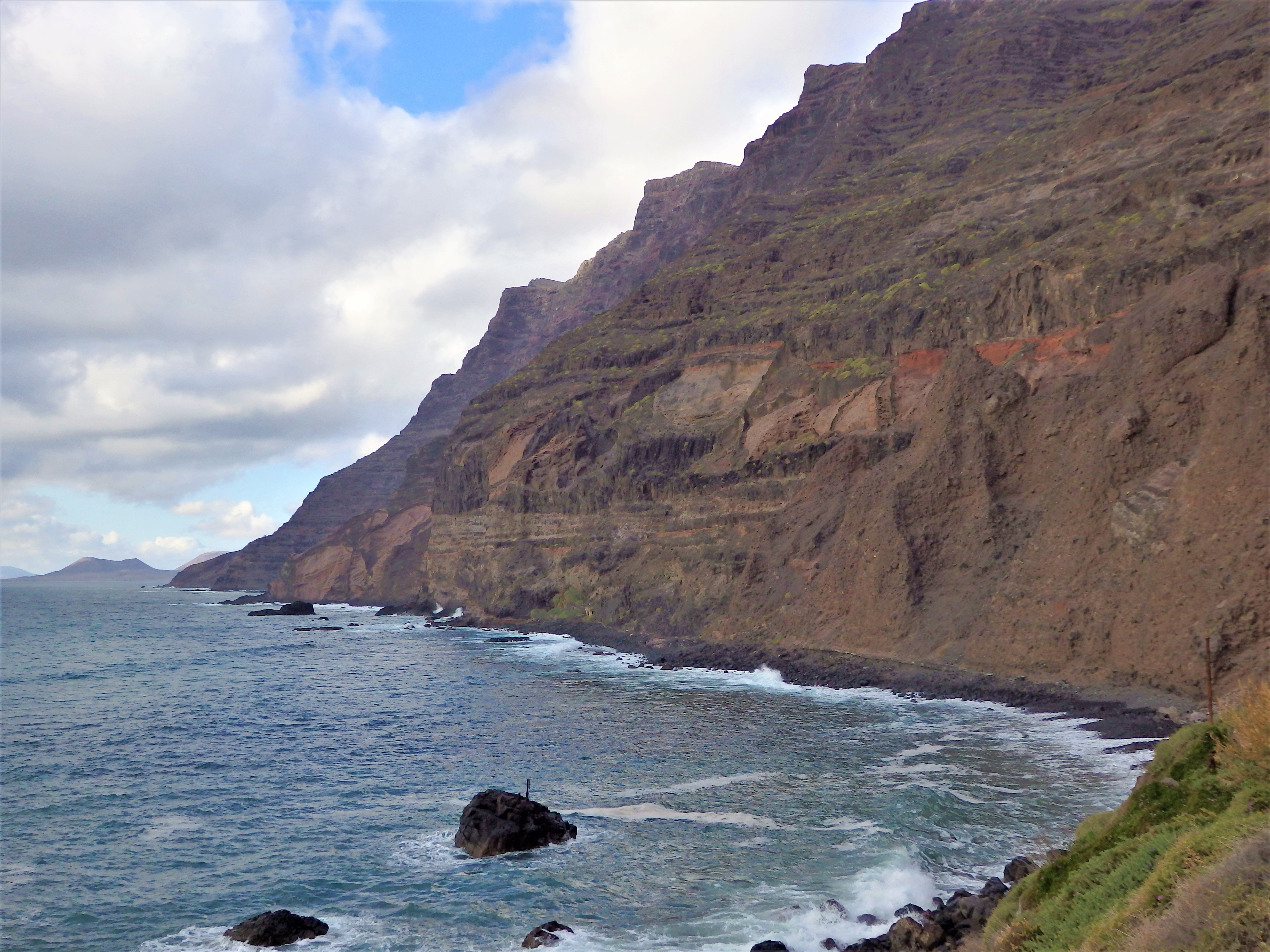 North of the island offers beautiful views towards La Graciosa island and it’s greener with plantations of all kinds, however, this island is mainly home to aloe vera. 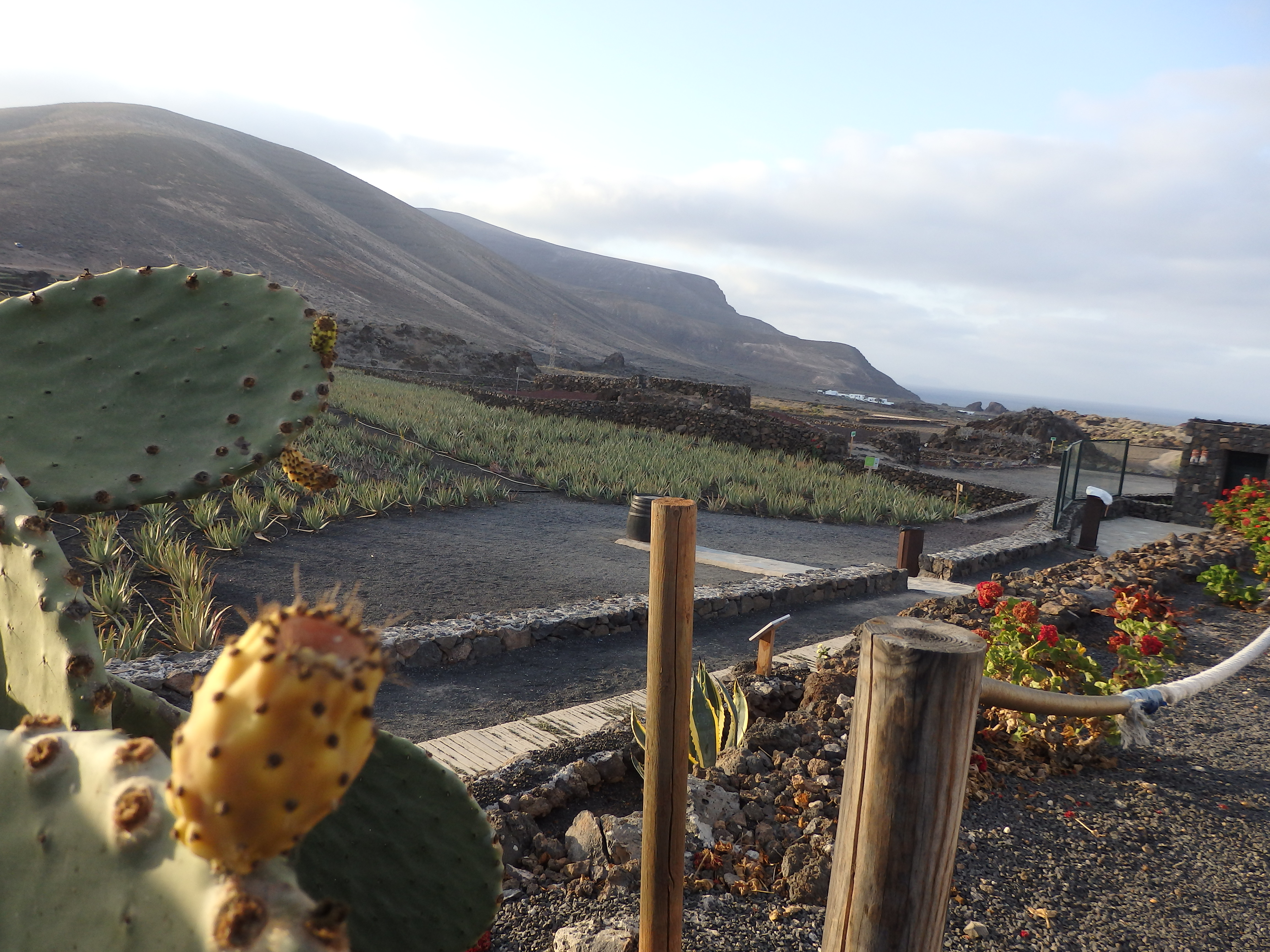 The land of fire mountains is a result of multiple volcanic eruptions that took place in Lanzarote between 1730 and 1736 and later on in 1824 that left this part of the island covered by a thick blanket of lava and ash. The park is named after the one active volcano, Timanfaya.

At the visitor center you can see food being cooked with earth’s natural heat and a fun moment is when the guides pour water into the ground. Magma, with temperatures from 100 to 600 °C, that’s not deeper than metres, boils that water within seconds, resulting in a geyser of steam. Read more about Timanfaya here. 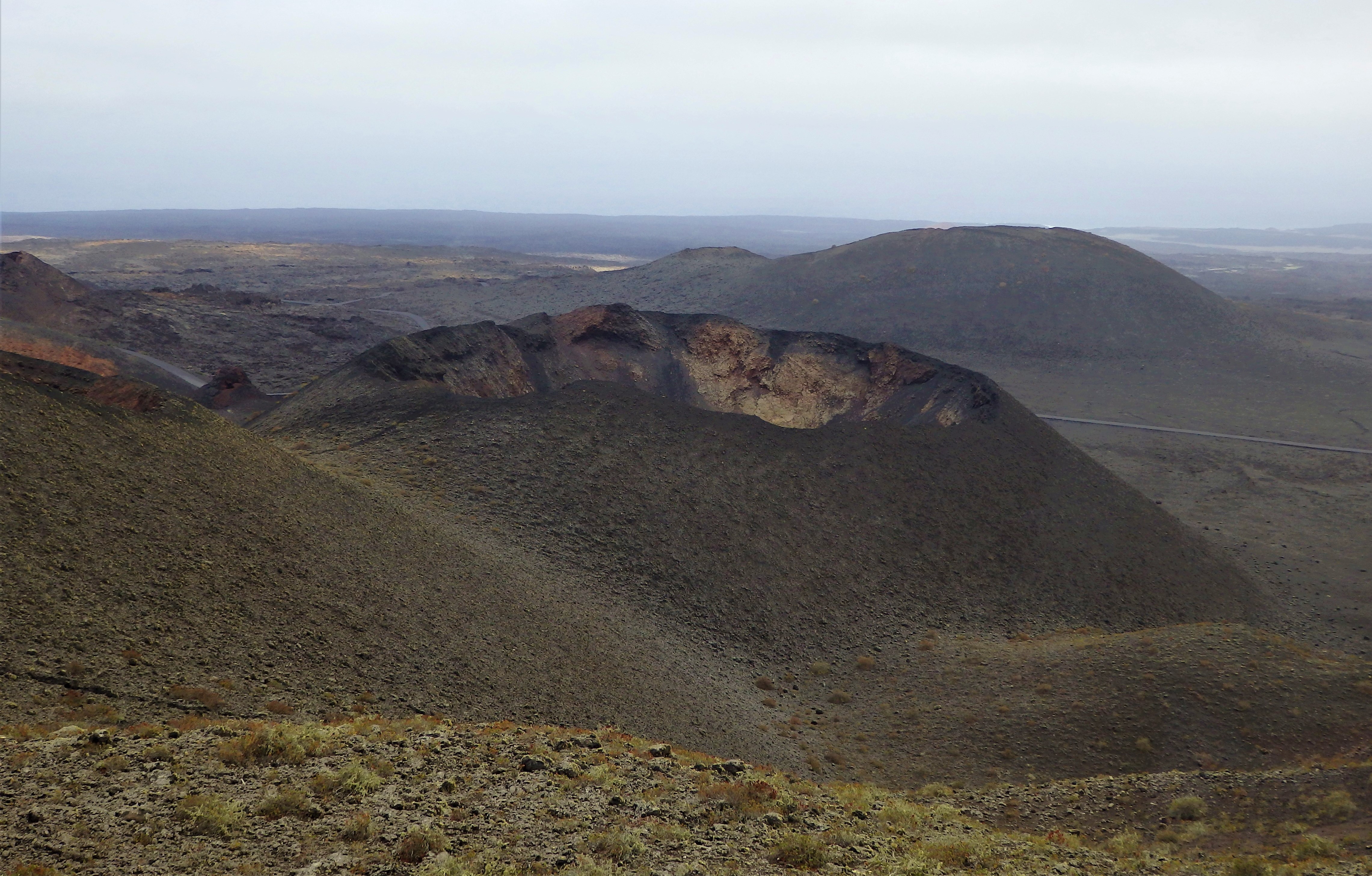 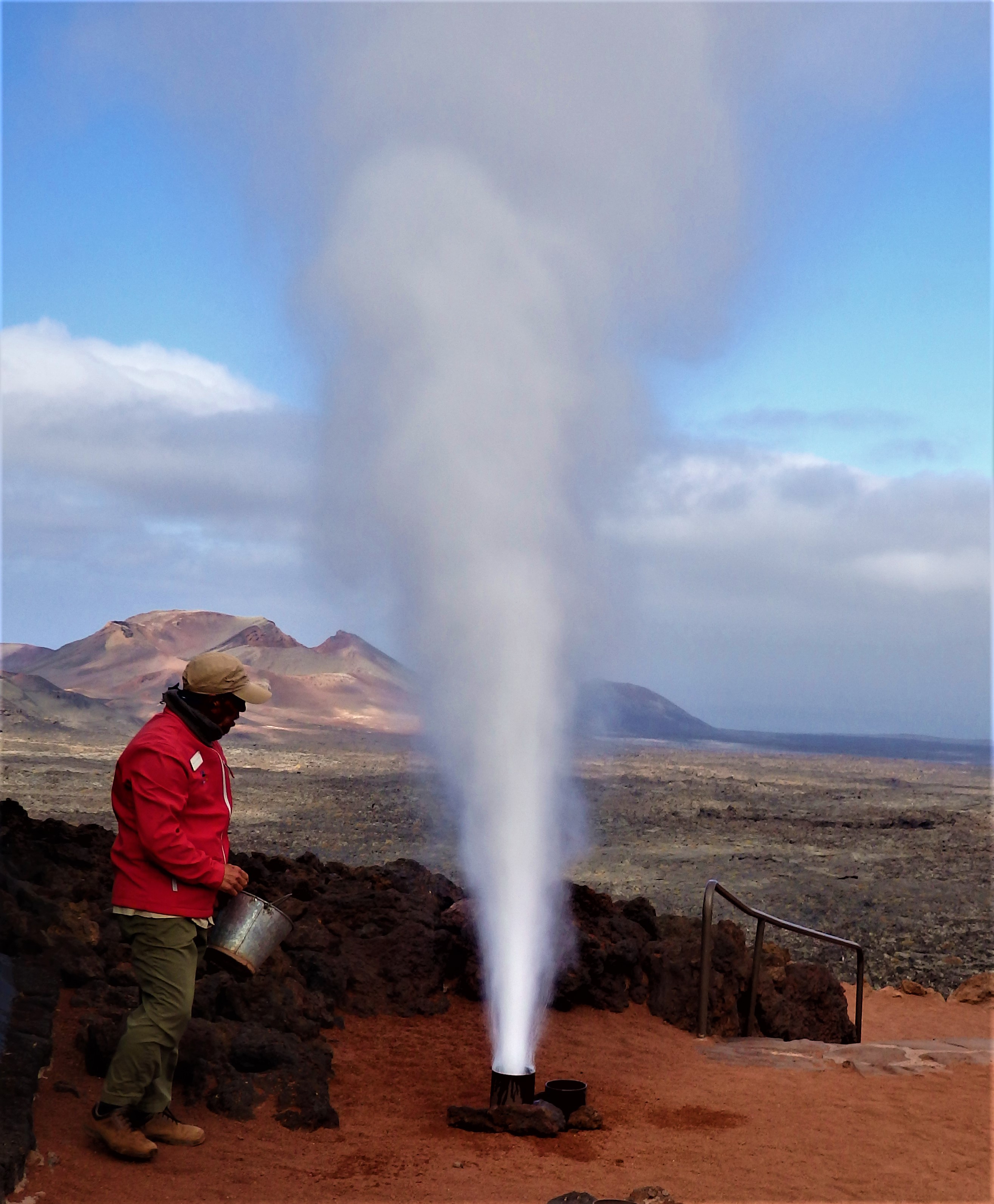 Here you can look inside an ancient volcano that has eroded by the sea. The crater wall displays a myriad of red and russet colors and  an unusually green lagoon Lago Verde.  Besides a very unique volcanic minerals and micro-organisms, you might be lucky if you find a semi-precious olivine between the pebbles and sand on the beach. Seemlessly separated by the beach, the lagoon is actually connected to the blue waters of the Atlantic Ocean by numerous underground passageways. 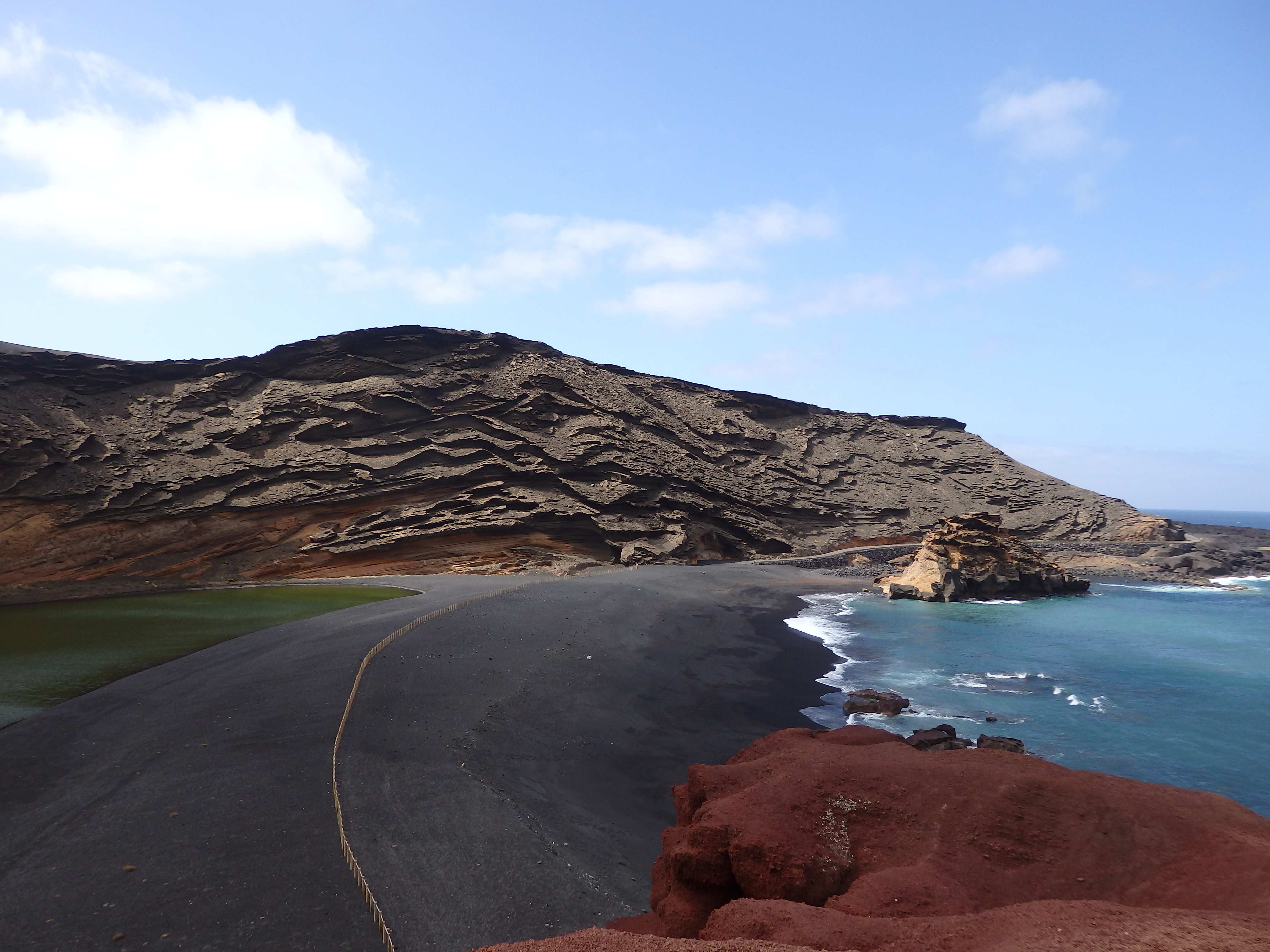 The  lava from 1730 volcano eruptions formed walls of a natural lagoon that gave space to creating these salt flats. The water from this lagoon evaporates, leaving only the sea salt. You’ll find them when following the coastline from El Golfo towards Playa Blanca. 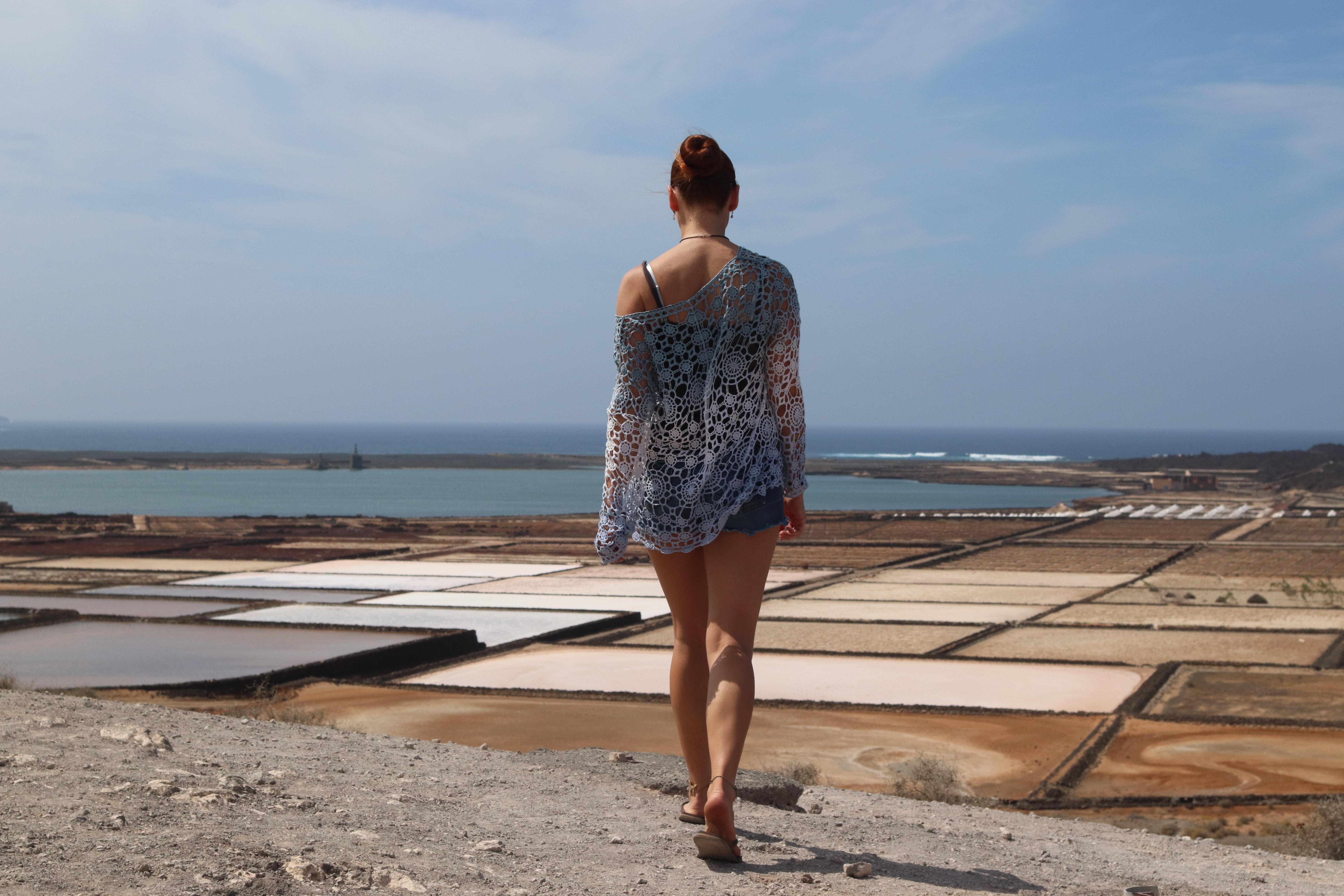 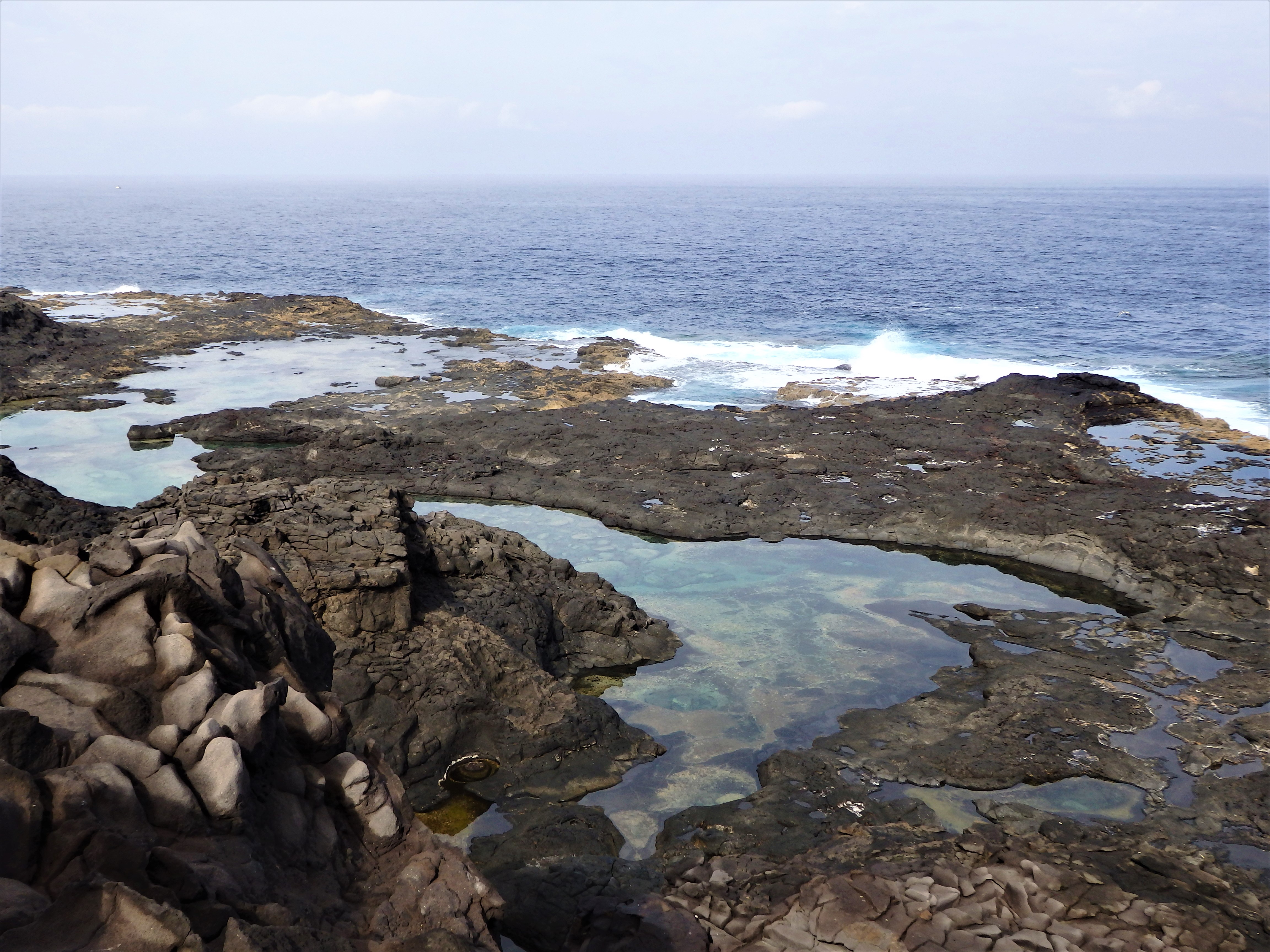 A popular beach in the south of the island that offers everything. Especially fun for snorkeling as there are many rocky cliffs and caves, a perfect hiding place to fish of all shapes and colors. It’s a quiet sandy beech with no waves so this is a good spot for swim as well. Many nudists enjoy this place as well. 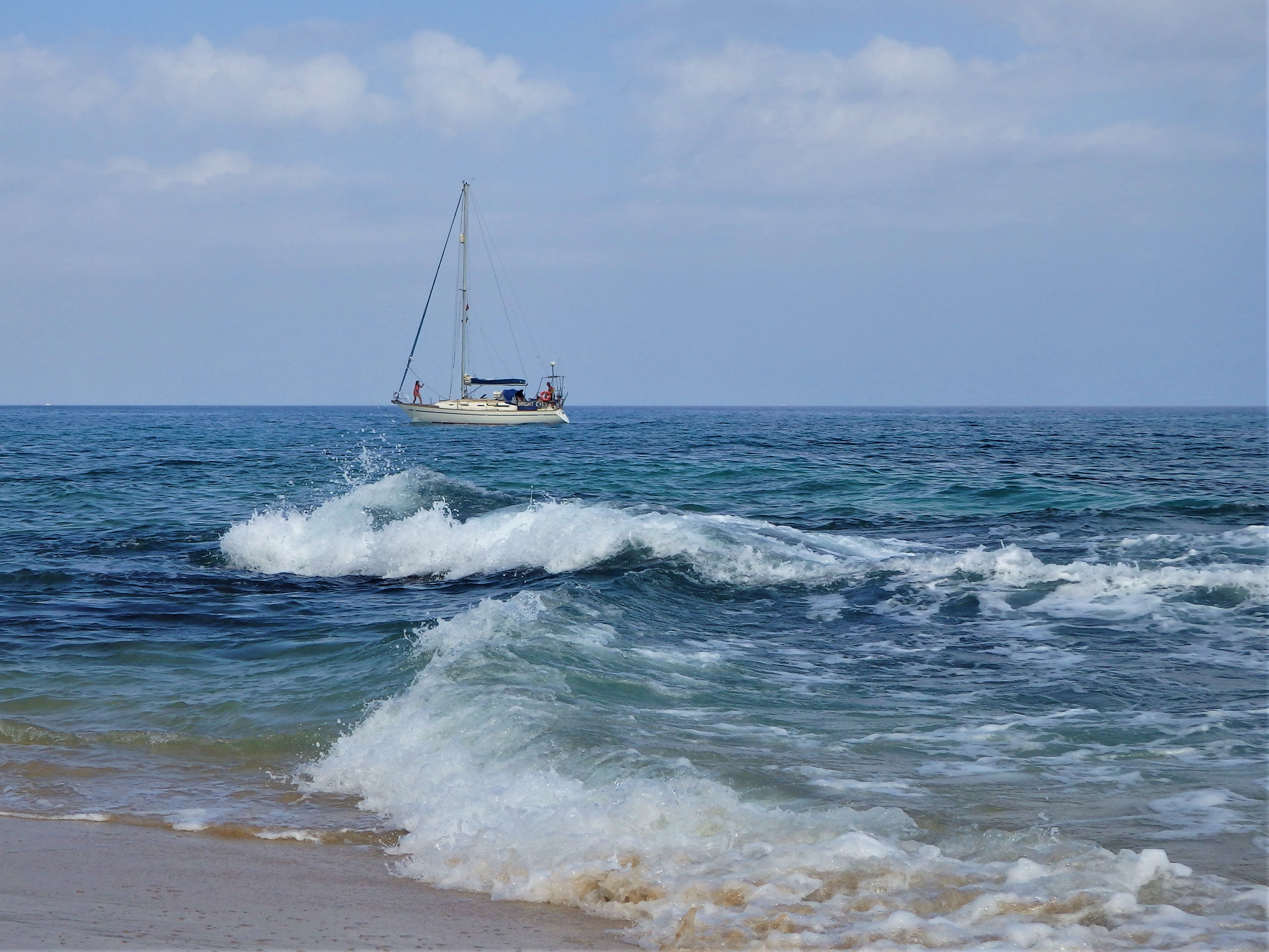 Lanzarote has one beach with constant waves, it’s a beach break that’s good for beginners to advanced surfers. Famara stretches from the Famara town all the way to the huge rock wall on the other side of the beach.

La Santa surfing (reef break) is known to be privileged to the locals. But if you smile at them and especially if you’re a girl, they let you surf in Morro Negro, right by Club La Santa. 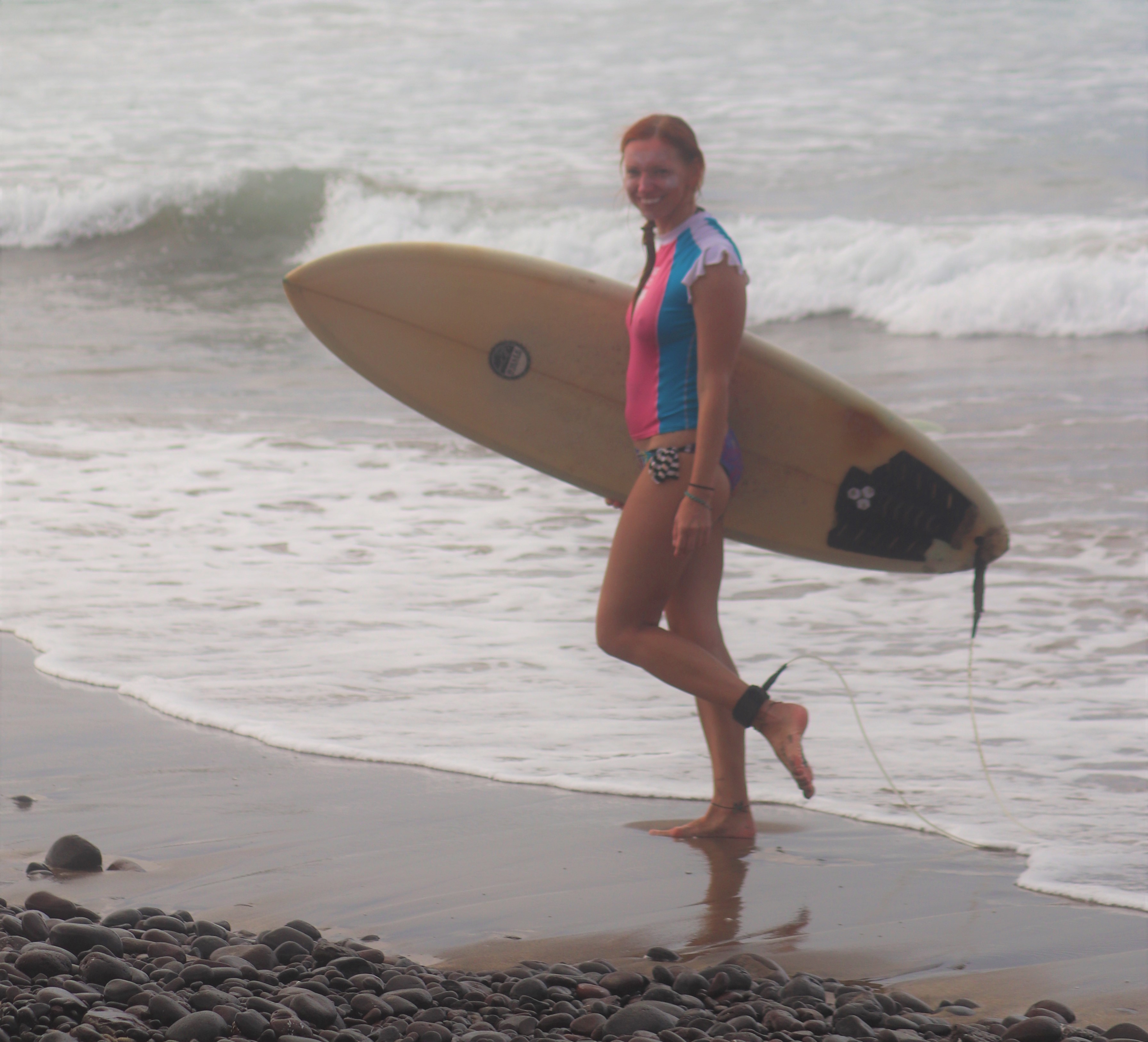 My time in Lanzarote also marks the beginning of my full time digital nomad journey. At that time, I’d  been a location independent freelancer for almost  three years, mostly combining with seasonal jobs or volunteering. Financially  it wasn’t easy and I was about to give up. But then a new job offer arrived and it all started. I had to go through a testing period (while I was enjoying life in Lanzarote) and a final presentation. I settled in a surf hostel in a village called Soo and everyone there kept their fingers crossed for me. We celebrated me becoming a full time digital nomad at a BBQ that evening. 🙂 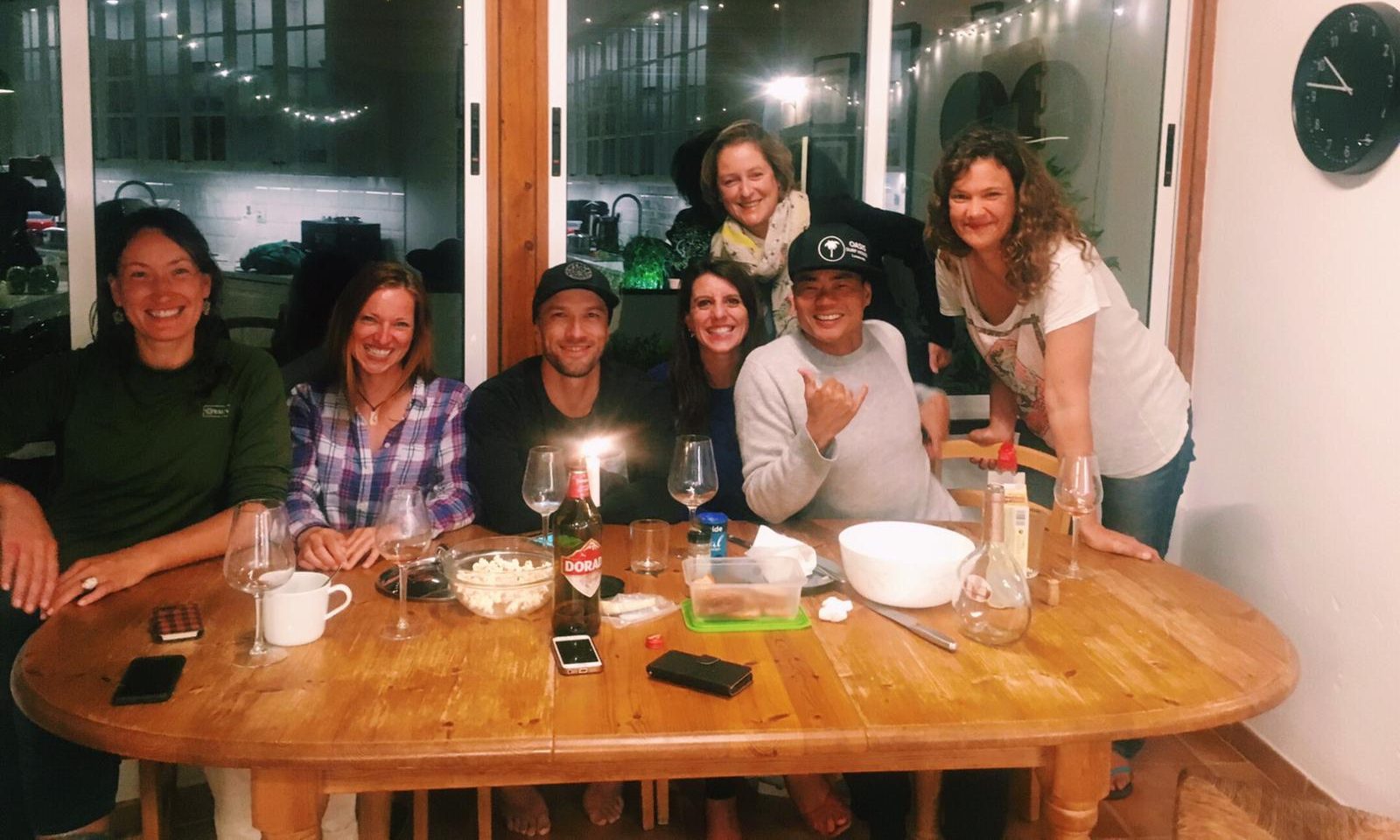 One of the highlights during my stay in Lanzarote was definitely the lucid dreaming journey. Introduced by Jana, the master of dreams who taught us how to interpret dreams and how to train ourselves to become lucid in our dreams. This journey has only just begun and it looks like its going to be a great adventure …