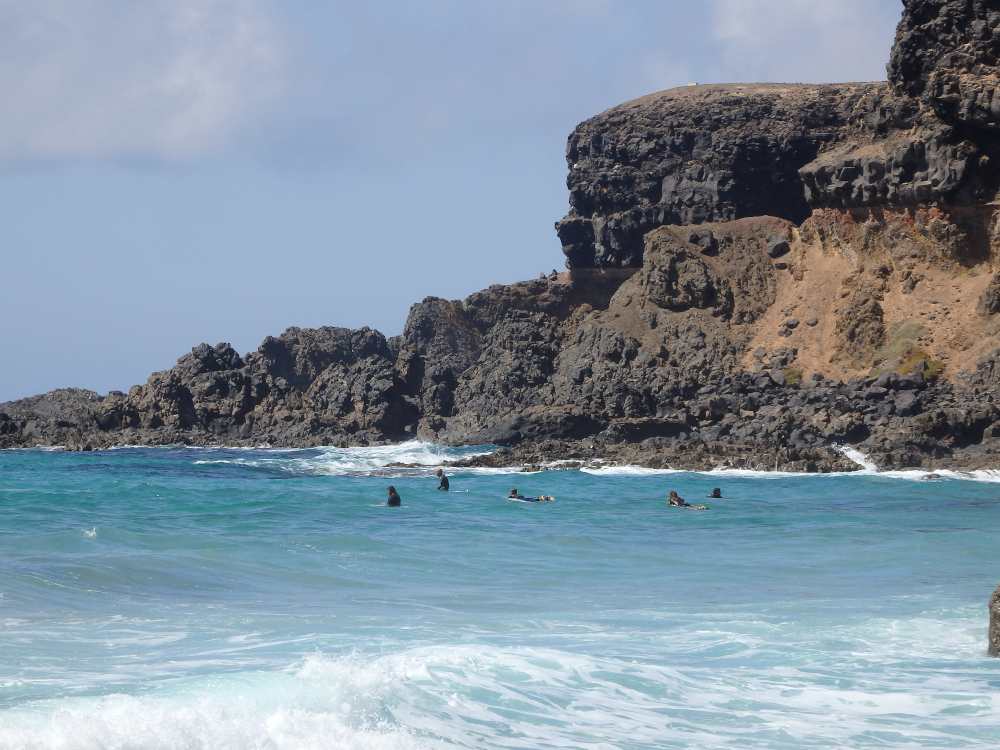 “This must be paradise!” I thought, gently floating on my surfboard, surrounded by turquoise waters and an empty beach. The winds took a day off and the waves in synchronicity decided to be kind too.

Think about a beach, surrounded by a high wall of rock, no one would notice it’s there until they walk to the cliff edge and look down …

The island’s moon-like nature resembles a desert. Numerous extinct volcanoes shape the landscape but never reach towards to sky. Perhaps that’s why it rarely rains here. Fuerteventura has a very pleasant climate, it’s warm here all-year-round. But if you stay longer, you can get slightly irritated by the strong winds, blowing mostly from the north.

The name Fuerteventura offers various explanations. Fuerte means ‘strong’, but the meaning of ventura might be translated as luck, happiness, wind or adventure, well take your pick! Those countless days, when I carried my surfboard from El Cotillo beach, back to the tows, facing north, strong winds pushing into my board, making it super hard in every step I took, I was pretty sure, I know the meaning of that word.

Enjoy taking a dip into the natural rock pools with turquoise waters. The rocky formations protect you from Fuerteventura’s strong winds and you can properly soak in the warmth from the sun. The ocean behind the rocks can be pretty wild at times. Especially with approaching high tide, I advise not to stand too close to the edges. You could easily get splashed by the broken waves from head to toes.

Further down south, there is a village called Ajuy. Only a few settlements scattered around this beautiful, yet dangerously looking beach. Ajuy is believed to be one of the most romantic spots in Fuerteventura, a perfect spot to watch the sunset. If you decide to explore the nearby caves, you won’t regret, there are plenty of mysterious spots, some of them leading to an open window in the rock, directly facing the wild ocean.

There’s something mysterious about Cofete beach. This well-hidden, solitary spot can be found at the south of the island. It is well protected by high mountains of Jandia. This breathtakingly beautiful 3 km long beach looks tempting but its high waves and the strong current can be treacherous.

This mysterious building was built by a german Gustav Winter, presumably to serve as a military base for the Third Reich. The legend says that the villa was connected to the sea through an extended, volcanic cave system and that way provided a safe secret passage to German submarines during World War II. Many famous war criminals are said to have undergone a cosmetic surgery here so they could escape to South America without being recognized and the surgeons never lived too long to tell anyone about them.

It is quite a drive from Cofete and to the south end of the island. You have to be prepared for miles and miles of curvy dirt roads. When passing cars in the opposite direction, you might get a peek of the deep void below and you slowly climb up into the mountain pass. The southernmost point of the island is Faro de Punta Jandía:

… but if you keep driving, on an even sketchier dirt road, you’ll find an abandoned lighthouse Faro Punta Pesebre and a beautiful rocky beach that faces Cofete beach, you can eve see Villa Winter from here.

I spent a few weeks in Corralejo because it has a co-working space with good internet. The town also offers plenty of shops and restaurants, even the beaches are not too far from the centre. It was quite hard to find waves to surf here. Although sometimes, at high tide, there is a fun wave right next to the ferry port.

Right outside of Corralejo, there is Parque Natural de las Dunas de Corralejo – 11 km long dune area with beaches with fine sand, contrasting with turquoise waters and rolling waves. This place is great for an afternoon chill by the beach, or if you dare, it’s also perfect for kiteboarding. If you like cycling, getting here is fast and easy. But because of the wind that kite surfers love so much, it is a real workout to bike back to Corralejo.

El Cotillo (home is where your heart is)

This lovely town became my home both times that I visited Fuerteventura. And even when exploring the rest of the island, I was looking forward to coming back home, to El Cotillo in the end. El Cotillo is mainly locals and only a few tourists come here. In its essence, it remains pure and beautiful.

It has a beautiful set of beaches right outside of town. You can surf in most of them, but many times, the waves get pretty rough here. Most of the times, the beaches are not overcrowded but if you’re willing to keep walking further south and dare to explore new routes and secret paths, you can get rewarded by an empty beach. Well, nearly. I shared it with seagulls and chipmunks (who finished my snack).

The best part about exploring an island i discovering secret beaches, the ones only locals know about.

Yes, El Cotillo is a sunset beach. It is the best reward after a long day, when the winds finally cease down and the sun doesn’t burn as much, to enjoy that peaceful moment and watch the sun sink into the endless ocean.